A comet crashes into the asteroid belt sending a giant meteor and many fragments hurtling toward Earth.

Three astronauts in Skylab (!) are watching the collision from near the asteroid belt. They are killed by the collision.

Dr. Paul Bradley (Sean Connery), a yachtsmen and former NASA engineer (!!), is summoned out of retirement to help point Hercules, an Earth-orbiting satellite with nuclear missiles pointed at the Soviet Union, towards the asteroid in order to destroy it.

Hercules does not have enough firepower so NASA must cooperate with the Soviet Union to get their orbiting missile platform, Peter the Great, pointed at the asteroid. Dr. Dubov (Brian Keith!!!) comes to New York City to work with Dr. Bradley.

Fragments of the asteroid hit Switzerland, Hong Kong, Siberia and eventually New York City. The missiles are launched from both platforms before the control center under the AT&T building is destroyed. The missiles destroy the meteor.

The survivors of the control center escape through a subway tunnel that is filling with mud as the river pours in. Dr. Bradley, Dr. Dubov, his translator Tatiana Donskaya (Natalie Wood!!!!) and NASA Administrator Harold Sherwood (Karl Malden!!!!!) survive.

This movie sounds great, but the special effects are awful, the dialogue laughable, Henry Fonda plays the President and Martin Landau (at career nadir) is a jingoistic general. Avoid this Sir Run Run Shaw production like the plague! 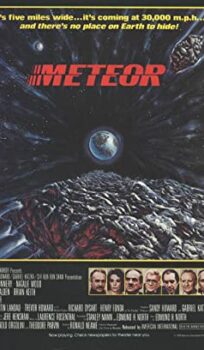