POOPER
Maria and Freder save the workers’ children from the flood.  The workers grab and burn Maria at a stake, thinking she killed their children, then realize she is actually Robot Maria.  The real Maria is being chased by Rohwing, thinking she is his late wife Hel.  Freder fights him on the roof of a cathedral, and Rohwing falls to his death.  Back on the street, Freder links the hands of Joh and Grot, fulfilling his role as The Mediator.

LONG VERSION
Set in the year 2026, society in the city of Metropolis has been separated into two distinct groups.  The rich upper class lives above ground in luxury, while the poor working class live below ground in poverty, and are always working on machines that make life easy for the upper class.  The leader of Metropolis is Joh Fredersen (Alfred Abel) .  Joh’s son Freder (Gustav Frohlich) lives a sheltered life, until one day when he sees Maria (Brigitte Helm), who has brought several workers’ children to the surface to show them the life of the rich.  Freder immediately falls for her, and follows her underground, where he sees for the first time the machines and the lives of the working class.  After an explosion of one of the machines kills several workers, the boss Grot (Heinrich George) orders the machine to be turned back on and re-manned.  Appalled by what he sees, Freder goes to his father and tells him what happened.  Joh shows cold indifference to the workers, so Freder goes back underground.  He sees a worker named Georgy 11811 (Erwin Biswanger) at a clock machine nearly pass out from exhaustion.  Freder takes the job for himself, and after switching clothes, tells Georgy to go enjoy a night on the surface.  10 hours later, the shift ends and Freder is absolutely exhausted once his replacement arrives.

While clearing out the bodies of the workers, Grot discovers papers amongst the dead bodies and takes them to Joh.  Joh takes the papers and goes to his former compatriot and rival Rohwing (Rudolf Klein-Rogge).  Rohwing is a scientist who has invented a robot that he plans on giving the appearance of Hel, his former wife who ran off to be with Joh and later died giving birth to Freder.  Rohwing looks at the papers and discovers they are maps of the underground catacombs.  They go underground to investigate, and they come upon a secret meeting of the workers led by Maria.  Maria is the leader of a cause trying to make life better for all of society by trying to unite the head (upper class) with the hands (working class) through a person she calls The Mediator.  Freder, who found a copy of the map in the work clothes he switched with Georgy, is also at the meeting.  After hearing her speak, he decides to join Maria’s cause, believing he could be The Mediator.  Looking for a way to suppress the workers even more,  Joh convinces Rohwing to give his robot the appearance of Maria instead of Hel.  Joh will use Robot Maria to sow discord among the workers, and once they rebel, he can use force to further control them.  Rohwing agrees to do this, but only because he believes that this could drive apart Joh and his son, since he never forgave him for stealing away his wife.  Rohwing kidnaps Maria, transfers her likeness to the robot, and sends Robot Maria to Joh.  He embraces Robot Maria and Freder sees them.  Thinking it’s the real Maria, Freder becomes depressed and goes back underground.

With the real Maria still being held by Rohwing, Robot Maria, on orders from Joh, goes below and is now talking about rebelling against the upper class.  Freder sees this speech, and tries to tell the workers that the real Maria would never talk about rebellion.  Seeing him as the face of the upper class, they attack Freder, who barely escapes with his life.  The workers then begin their rebellion by destroying the machines, which causes the underground city to flood.  At this time, a drunken Rohwing is telling Maria that Robot Maria is inciting the workers under Joh’s orders, but he programed it to also destroy the relationship between Joh and Freder.  Joh, who came to Rohwing’s house, overhears this and fights him, allowing Maria to escape.  She gets to the underground city, only to see the floodwaters rising.  She and Freder are able to rescue the children in time, unbeknownst to the workers.  Meanwhile, Joh has learned that Freder is underground with the workers, and he realizes that his plan to further suppress them was a catastrophic mistake.

As the workers are celebrating the destruction of the machines, Grot is berating them for killing their children.  They left them in the city, and they are probably drowned by now.  They blame Maria for their deaths, so they decide to go after her, with plans to burn her at a stake.  They find Maria just after she and Freder get the children to safety, but she gets away.  The workers then find Robot Maria and burn her alive.  Freder sees Maria burning, thinking it’s the real her, but then he and the workers see that the Maria that is tied to the stake is a robot.  At this time the workers also find out that their children are all alive and safe.  However, the real Maria is now being chased by a delusional Rohwing, thinking she is Hel.  Freder sees this and chases both of them onto the roof of a cathedral.  As everyone, including Joh, Grot, and the workers watch, Freder and Rohwing fight on the rooftop, where Rohwing falls to his death.  The movie ends with Maria and Freder returning to the street, where then Freder links the hands of Joh and Grot, fulfilling his role as The Mediator. 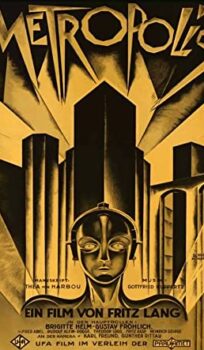