This film (loosely based on the notorious real story of Natascha Kampus’ 8-year-long abduction) deals with what seems to be a harmless average joe but, in reality, is a monstrous pedophile who has kept a 10-year-old boy as a prisoner in the basement of his house for a while. While there is no graphic depiction of child sexual abuse, there is still a lot of psychologically-upsetting inference of it.

POOPER:
Michael (Michael Fuith) dies in a car crash when he tries to drive to the hospital after Wolfgang (David Rauchenberger) burns him with hot water, unsuccessfully attempting to escape from captivity.

After his funeral, his mother (Christine Kain), while rummaging through his belongings, finds the door to the secret room and starts opening it as the movie ends. We don’t get to find out if Wolfgang is actually discovered, or if he is even still alive.

LONG SPOILER:
Michael is an Austrian mild-mannered, introvert insurance broker who leads an apparently inconsequential life; he has very little social contact beyond his loving family and, to a certain extent, some of his co-workers -particularly a very talkative co-worker named Christa (Gisela Salcher) seems to have taken an interest in him, to which he doesn’t react-, lives alone in a house and keeps to himself.

What nobody knows is the horrible secret Michael harbors in the soundproof basement of his house: a 10-year-old boy named Wolfgang, whom David has kept imprisoned for many months. During the day, Wolfgang is permanently down in the tiny basement, behind a heavily locked, reinforced metallic door. At nighttime, after Michael all but seals the house from the outside view, he then allows Wolfgang to come upstairs, where, in a rather awkward, almost silent father-son-like interaction, they have dinner, do some chores and watch TV together. Wolfgang is usually sullen and quiet, visibly traumatized from his ordeal.

Although no scenes of sexual violence are shown, there is strong innuendo of it.

Michael has made Wolfgang believe his parents don’t want him back and even tries to “get him a playmate” (He unsucessfully tries to lure and snatch another boy away at a local arena, to keep Wolfgang from trying to escape).

During Wolfgang’s captivity, Michael is seen experiencing a few situations that put him, one way or another, on the brink of being discovered: he is hit by a car while crossing a street and has to spend a few days in hospital to fully recover; Wolfgang gets sick and, to avoid exposing him by going to a hospital, Michael decides to dig a hole in the woods to bury Wolfgang in case the boy dies -but he recovers-; and, unexpectedly, shortly after a ski trip in which they spent some time together -and even tried to have sex, to no avail-, Christa shows up at Michael’s house and he violently throws her out of the house. Meanwhile, although Wolfgang appears submissive and adapted to his situation -save from occasional outbursts against Michael-, he is sometimes seen crying, visibly in despair and longing for this ordeal to end.

One night, upon Michael returning from a party, when he goes down to see about Wolfgang, the boy throws a pot of boiling water on his face, severely burning him; a brief scuffle follows, when Wolfgang tries to run away, but Michael, despite having being almost fully blinded, overpowers him and locks him back in the secret room. He tends to his burns and attempts to drive to the hospital, but gets killed upon losing control of the car and crashing it.

People are seen paying their respects to Michael’s distraught relatives at his service, and the Parish Priest eulogizes him. Afterwards, the relatives are seen discussing how to deal with Michael’s house and belongings. His brother-in-law (Victor Tremmel) and mother go to the house to carry the deed.

Towards the end of the film, the mother descends to the basement, contemplates the contents and, when the brother-in-law requests an extra bag and she goes back down a second time to look for it, she notices the secured door of the room where Wolfgang is kept. The screen goes black right as she unlocks it and starts opening the door to look inside the room; we are left to infer whether she does discover Wolfgang and whether he is alive or dead. 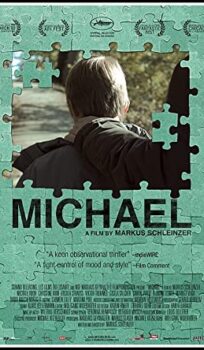