Law firm “fixer” Michael Clayton (George Clooney) discovers that his colleague, Arthur (Tom Wilkinson), has found evidence that will cost their firm’s client, U-North, billions of dollars in a class-action lawsuit.  However, U-North’s chief lawyer, Karen Crowder (Tilda Swinton), hires two “experts” to tap Arthur’s phones and later kill him, making his death look like a suicide.  The same “experts” plant a bomb in Michael’s car as well, but it detonates when he steps out to look at some horses on a country road.  Karen mistakenly thinks Michael is dead and her company’s secrets are safe, but he appears and confronts her — while wearing a wire.  The police quickly arrest her and U-North’s CEO while Michael walks away, relieved. 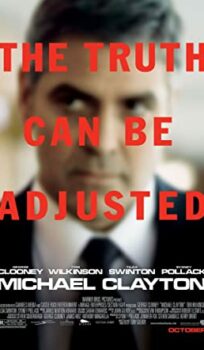