Frank (William Hurt) and Dorothy (Andie MacDowell) fall in love with each other during the last leg of the trip, courtesy of Michael’s (John Travolta) subtle engineering. One morning, Sparky is run over by a truck and killed, but Michael resurrects him. Before he does, Dorothy tells Frank that she was not an angel expert, but a dog trainer that Malt (Bob Hoskins) hired to get friendly with Sparky. Malt loved Sparky, but disliked both Huey (Robert Pastorelli) & Frank, so he made a deal with them that if they failed to bring Michael to him, then they would be fired and he would keep Sparky. Dorothy would then be given Huey’s job, which – she also reveals – she was after from the start.

They all make it back to Chicago, and after showing Michael the Sears Tower, he thanks them for everything and fades away, returning to Heaven.

The trio go to Malt’s office and tell him that Michael was a hoax. Dorothy then lies to Malt, saying that she was unable to train Sparky, which allows Huey to keep both Sparky and his job. However, Frank decides to quit. Outside, Frank returns to his old cynical self and ends things with Dorothy. The trio go their separate ways, knowing that they had traveled with an angel, but they don’t understand what it all meant.

One night, Frank spots Michael in the streets, and chases after him until he bumps into Dorothy, who was also pursuing Michael. Their faith is restored, as is their love, and Frank asks her to marry him and she accepts. As they walk off, Michael and Pansy (Jean Stapleton) watch them go, and then they dance back to Heaven. We’re left to assume whether Pansy became an angel after she died or if she was an angel all along. 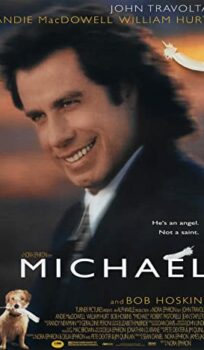