Alton (Jaeden Lieberher) belongs to “another world on top of ours”, whose people have been watching our world from a long time. He is captured by federal agents but uses his power to convince NSA agent Paul Sevier (Adam Driver) to return him to his father Roy (Michael Shannon), mother Sarah (Kirsten Dunst) and family friend Lucas (Joel Edgerton). They take him to the assigned place at the assigned time. Roy and Lucas act as decoys to the soldiers waiting to capture Aldon while Sarah takes Aldon to the spot. The other world appears in ours, with spectacular futuristic structures appearing within hundreds of miles from their location. The people of that world, their eyes glowing white like Aldon’s, surround Aldon. The other world then vanishes and taking Aldon with it.

Sarah escapes undetected by police while Roy and Lucas are arrested and imprisoned. Sevier interrogates Lucas, having covered up his own role in Aldon’s escape from federal custody. Roy is held prisoner with electrodes on his head, accompanied by prison guards, watching the sunrise. A faint white glow flickers in his eyes. 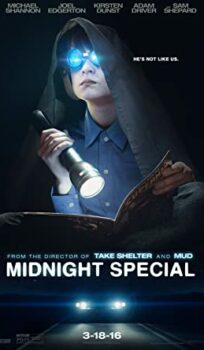