In the Spring of 1942, the Japanese Naval Fleet prepared to attack in two locations:  The Coral Sea off Australia, and Midway Island, NW of Hawaii.  With the American Navy still recovering from Pearl Harbor, the Japanese believe that this will finish off the Americans and open the door to an American surrender in the Pacific.  However, American code-breakers have already determined that Midway will be the location of the next Japanese attack.  Despite reluctance from Washington in placing the remaining fleet in one location, Admiral Chester Nimitz (Henry Fonda) orders the last 3 remaining carriers from Pearl Harbor to Midway:  The USS Enterprise, USS Hornet, and USS Yorktown (which was being repaired after suffering serious damage at Coral Sea).  Meanwhile, Captain Matt Garth (Charlton Heston) is assisting his son Tom in his request to get his Japanese-American girlfriend and her family out of an internment camp.

The movie shows the battle from both sides, with Japanese Admiral Isoroku Yamamoto (Toshiro Mifune) and his 4 carriers planning the attack, and American Rear Admiral Raymond Spruance (Glenn Ford) and his 3 carriers defending the island and attacking the Japanese fleet.  The battle lasted 4 days, with the Americans destroying all 4 carriers, but losing the Yorktown.  The battle was the turning point of the war in the Pacific.  This was the first major battle the Japanese lost, and the first the Americans won.

At the end of the movie, Capt. Garth’s plane, shot up by the Japanese, crashed while attempting to land on the Enterprise, killing him instantly.  Tom, who was wounded in battle, returns to Pearl Harbor, where he is met by his girlfriend, who was just released from the internment camp. 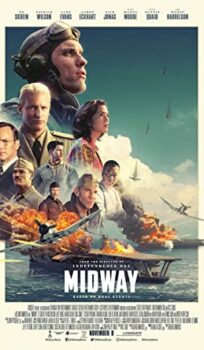