SHORT VERSION:
Mike and Dave eventually find out that Tatiana and Alice had only agreed to be their dates to Jeannie’s wedding just so they could have a free trip to Hawaii, and Jeanie and Eric wind up calling off the wedding the night before the ceremony thanks largely to some boneheaded actions caused by both pairs. However, the next day, all four accept the blame for screwing things up and apologize to Jeanie and Eric before vowing to get their wedding back on track. They cobble together the necessary things, plus Mike passes an online course to become an ordained minister, and Jeanie and Eric tie the knot.

At the reception, Alice – who had become genuinely (and mutually) attracted to Dave after they had spent time bonding with each other – deletes her video of her failed wedding to Luke and makes out with Dave. Also, since Dave has decided to quit selling liquor with Mike to pursue his real passion – drawing – full time, Mike extends an offer to Tatiana to be his new business partner, and she accepts, plus they later have sex. Mike and Dave end up ruining the reception with a botched fireworks show.

LONG VERSION:
The atmosphere of the wedding weekend starts to come unglued when Mike (Adam DeVine) – who is out looking for Tatiana (Aubrey Plaza) in the hotel’s spa – accidentally walks in on Jeanie (Sugar Lyn Beard) getting a happy ending from her masseur (which was secretly arranged by Alice [Anna Kendrick] to ease Jeanie’s stress about the ceremony). Then, as he is trying to get over the shock of this sight, he finds Tatiana fingering his cousin Terry (Alice Wetterlund) (which she did to get Alice backstage tickets to a Rihanna concert that Terry told her she could get for her), and he then initiates a fight with Terry and loses. A short time later, Mike confronts Tatiana and gets into an argument with her, and she accidentally confesses that she and Alice aren’t the good girls they claimed to be and don’t really dig him or Dave (Zac Efron); they just came along for the free vacation.

Meanwhile, Dave and Alice actually do start to fall for each other, and he eventually tells her that he wants to stop selling liquor with Mike and pursue his real passion, drawing, on a full-time basis. Alice admits to Dave that her ex-boyfriend Luke (Kyle Smigielski) did not die in a plane crash like she told him, but in fact jilted her at the altar, and then she shows him the video she kept of the incident on her phone. She tells him that she couldn’t divulge this to him at first because she didn’t want him to think she was damaged goods, but Dave replies that he finds her to be a nice gal. Their moment is then spoiled when Mike appears and calls Dave away, and he enlightens Dave to the real reason Tatiana and Alice are here, but Dave doesn’t care because he feels Alice has been through a lot and really needed this trip. Mike also tells him about what Tatiana and Terry had gotten up to and what happened with Jeanie.

At the rehearsal dinner that night, things go from bad to worse when Alice and Jeanie first get high on ecstasy that the former had brought along, and then they wind up frolicking naked around the horse stables and setting the horses free. In the midst of it, Jeanie reveals to Alice that she thinks Eric (Sam Richardson) is a rather ho-hum person and disliked how he shot down her dream to take a hot air balloon ride on their honeymoon, and she thinks their marriage will be bereft of adventure and excitement. Meanwhile, when Mike and Dave are backstage getting ready to make their speech, Mike reveals that he plans to spike Terry’s drink with a strong laxative so she will defecate herself in front of everyone, both as revenge for what she did with Tatiana and for wanting to be superior to her at something. Dave is against this and prevents him from carrying the act out, then says that he isn’t doing the speech with him and is quitting their liquor business to pursue drawing. As this happens, Terry is doing her speech, but when she has Keith (Lavell Crawford) turn up the volume, the speakers suddenly pick up Dave and Mike arguing over their microphones without their knowing. They bring up the attempted poisoning of Terry, what she and Tatiana did, and how Jeanie got an orgasm from her masseur. They then begin brawling, which spills out onto the stage, after which Keith declares the rehearsal dinner over.

Mike and Tatiana later chat with each other, and Tatiana apologizes for being so rough on him, saying that she did so because he reminds her of herself: A person who appears to others as having it all together but is, deep down, a real mess. As this happens, Dave finds the naked Alice and Jeanie, as does the maid of honor Becky (Mary Holland), who covers up Jeanie and escorts her away. Dave finds out from Alice that they are drugged up, and he rebukes her for doing that to Jeanie before dressing her in his clothes and ushering her back to the hotel. When they return, they find Eric arguing with Jeanie over both the massage and her intoxicated state, with Mike and Tatiana already witnessing it. Jeanie then tells Eric that she finds him boring, and when he asks if she doesn’t want to marry him now, she runs off crying. Dave chews out Alice again for getting Jeanie high and walks away, and Mike tries to apologize to his parents for his and the girls’ part in the collapse of the wedding, but they refuse to listen.

The next morning, Mike and Dave get ready to head back home, as do Tatiana and Alice, and both pairs accept responsibility for ruining the wedding. However, they all soon decide that they can’t have things end like this, so they converge on Jeanie and Eric’s room to try to get the ceremony back on track. They all attempt to apologize to Jeanie and Eric, but things devolve into an argument between the quartet over who is more to blame, prompting Eric to order them all to shut up and lambaste them for their character faults. He then shows them all that he is not such a dull guy by presenting Jeanie with two tickets for a hot air balloon ride as an early honeymoon present. He and Jeanie iron out their differences and decide to wed, but they bemoan the fact that they have already cancelled the vendors and have no place to hold the wedding and reception. Mike, Dave, Tatiana, and Alice tell them to leave that to them, and they are able to cobble together the necessary things, plus Mike passes an online course to become an ordained minister. Later that day, Mike weds Jeanie and Eric outside the stables.

At the reception, Mike offers Tatiana a chance to sell liquor with him since Dave is pursuing another career now, and she accepts while hinting that she wishes to get intimate with him. Meanwhile, Alice accepts that Dave is the right guy for her, so she finally deletes her failed wedding video and soon makes out with Dave in full view of everyone. That night, Jeanie and Eric thank the quartet for saving the day, and Mike and Dave take the stage and perform the heartwarming duet for Jeanie that they were originally going to do at the rehearsal dinner, and Tatiana and Alice then join them for a raunchy dance number that is not as well received. Mike then shoots off some powerful Chinese fireworks, but they quickly get out of control and send the panicked guests running. Mike and Tatiana later have sex in the stables. 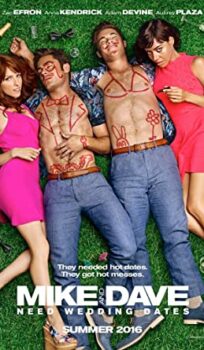