Harvey Milk (Sean Penn), becomes the first openly gay man elected city supervisor in San Francisco and he works hard to fight for gay rights in the city and around the country.  Fellow supervisor Dan White (Josh Brolin) resigns as result of Milk’s activism, but later changes his mind.  When the mayer (Victor Garber) refuses to reappoint him, White shoots and kills the mayor before going to Milk’s office and doing the same.

The night before the assassination, Milk called his estranged boyfriend Scott (James Franco), who told Milk that he was proud of him.

Titles at the end state that Dan White received only five years in prison, but killed himself after release.  The titles also state that many of Milk’s friends are still active in the gay rights movement. 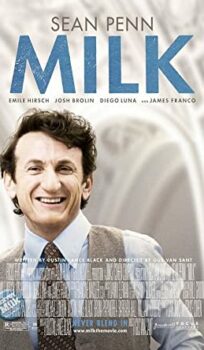