Tom (Byrne) tells Leo (Finney) that he’s been with Verna (Harden) to try to prevent Leo from proposing to Verna and to push Leo to take out her brother Bernie and stop the pending gang war with Caspar (Polito).

Leo beats Tom out of his club and Tom goes over to Caspar. Caspar demands something from Tom to trust him, so Tom gives up Bernie but is then ordered to take him into the woods and kill him.

Unable to do so, presumably because of his feelings for Verna, he pretends to shoot him and tells Bernie to disappear. Tom then sets about trying to frame Caspar’s henchman (the Dane ((JE Freeman)) for giving out information about Caspar’s fixed fights. And then Bernie shows up in Tom’s apartment, demanding that he kill Caspar or else Bernie will let everyone know that Tom never killed him.

Caspar is eventually convinced by Tom and murders the Dane. He then agrees to go to Tom’s apartment to meet with Mink (Buscemi), who was both Bernie and the Dane’s lover but who was actually murdered by Bernie and whose body was substituted for his own in the woods. But Bernie, who is there, waiting for Tom, gets the drop on Caspar and kills him.

Tom arrives and pretends that he and Bernie will go their separate ways, but does this only to lower Bernie’s defenses. He shoots Bernie, who pleads with Tom like he did in the woods, asking, “Look into your heart.” Tom replies, “What heart?” He then goes to Leo to let him know that he left him in order to take care of Caspar but that they’re through.

Verna, angry with Tom for his betrayal of her brother, proposes to Leo and they are to be married. Tom stands alone in the woods after Bernie’s funeral. 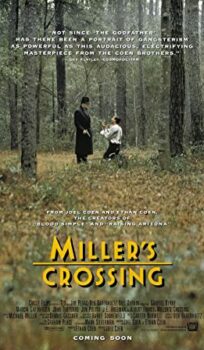