One day in Liverpool, young Damian is hit on the head by a flying bag full of money. The money, over 200,000 pounds, will be worthless once England switches to the Euro. He takes it home, where he and his brother Anthony start spending it. Damian uses it to help the poor, taking them to Pizza Hut and donating 1000 pounds to the nice lady who is collecting at their school. Anthony spends it on friends and buying toys.

The money belonged to a robber, who threw it off the train. He comes looking for it, causing a few close calls. Eventually, after Damian disappears at the Nativity play, his father finds out about the money (Damian’s mother is dead). The family, plus the nice charity lady, who has taken an interest in the dad, go on a spending spree, and spend a day converting all the pounds they can into Euros. The robber, who has threatened Anthony, burgled the house, and hidden in the attic until the family gets back, is caught by the police, who remained in the house after it was burgled.

Damian takes the remainder of the money to the train tracks, where he burns it, and sees his “Saint” dead mother (Damian sees and converses with saints throughout the movie). Only this time, Anthony sees her too!

It turns out that each of the family kept a little bit of the money, and want to spend it on something material. In the end, it is presumed that the money is donated to an African village, so they can have a functioning well. The movie end with Damian, Anthony, their father, and the nice Charity Lady getting into Damian’s cardboard box, which turns into a rocket ship and takes them to the African village. 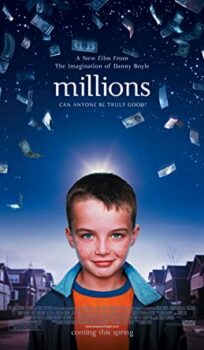