Short pooper:
Judge Harper (Robert Prosky) rules in favor of Kris Kringle (Richard Attenborough), thus declaring him as the real Santa Claus, and dismisses the case. Everyone cheers. Dorey (Elizabeth Perkins) and Bryan (Dylan McDermott) do get married, much to Susan’s (Mara Wilson) delight, as two of her three Christmas wishes -a loving father and a new house- are fulfilled, as they all go together and visit the catalog house offered by Mr. Kringle, Dorey asks Susan what the third wish was, to which she gleefully answers “a baby brother”; Dorey and Brian conspicuously look at each other, since IT WAS the morning after their wedding night, after all, as much as Christmas morning, and they kiss.

Longer version:
Having heard both Prosecutor Collins (J.T. Walsh) and Bryan present their cases at the hearing, as well as Kris Kringle himself, testify to his ongoing claim of being the real Santa Claus. Just about to make his ruling -which seems like Kringle will end up permanently committed to the mental institution where he was sent after the incident with Falacchi (Jack McGee), the disgruntled previous Santa from Cole’s-Susan approaches the bench and hands Judge Harper a Christmas card with a $1 dollar bill; he doesn’t think much of it until he notices that the phrase IN GOD WE TRUST is circled. This makes him realize that people need the inspiration of Santa Claus as a miracle for Christmas, the same way the U.S. Department of Treasury puts their faith in God -and indicates so in banknotes-without the requirement of overwhelming physical evidence.

In consequence, the case is dismissed in favor of Kringle, who is officially deemed by the Court as the real Santa Claus, much to the chagrin of Collins and also the executives of Cole’s -who will now have to do a lot of damage control, having originally intended just to throw Kringle under the bus to save face- and their competition -who were hoping to see Cole’s sink so they could buy them out-. A massive crowd all throughout New York joyfully celebrates the verdict. In turn, Kringle gets Brian and Dory to admit their true feelings for each other, and they end up getting married in a small ceremony right after Midnight Mass on Christmas Eve.

The next morning, Christmas Day, Susan wakes up to discover that one of her wishes came true: Brian is now the father she always wanted. Afterward, the new family drive together to visit the lavish catalog house Dory wanted -but felt she couldn’t afford-; upon arrival, they are received by Kringle’s assistant, who informs them “he is currently overseas” -ostensibly off to perform Christmas duties around the world- but made all pertaining arrangements so that they could purchase and own the house. This makes for Susan’s second wish.

Curious about it, Dorey asks Susan what her third wish for Christmas was, to which the girl proudly answers, “just a baby brother,” and runs off upstairs to check the rest of the house. Realizing they DID consummate their marriage, after all, Dory and Brian look at each other and Dory’s belly, slightly in shock, and share a kiss as the movie ends. 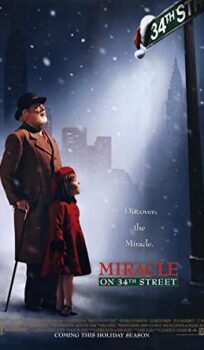