When the bombing of the Kremlin is pinned on Ethan Hunt’s (Tom Cruise) IMF team, the IMF Secretary (Tom Wilkinson) officially dissolves the IMF, but invokes the “Ghost Protocol”, whereby the team operates unauthorized using an “overlooked” cache of equipment and weapons.

The IMF secretary is killed in the limo carrying Hunt and Brandt (Jerry Renner). Brandt joins Hunt’s team even though Brandt was watching Hunt’s wife when she was killed by Serbian assassins. Hunt later killed the assassins and was imprisoned in Russia, where the IMF team breaks him out of at the start of the film.

The IMF team travels from Moscow, to Dubai and finally to Mumbai dispatching the henchmen of Hendricks (Michael Nyqvist), an apocalyptic Russian who plans to use the launch codes stolen from the Kremlin (the blast covered up from the theft) to use an old Russian satellite to command a Russian nuclear sub to launch a missile at San Fransisco. The resulting nuclear exchange will allow humanity to “start over”.

Bogdan (Miraj Grbic), the prisoner Hunt rescued from the Russian prison, leads Hunt to a Russian arms dealer that was in cahoots with Hendricks. The arms dealer reveals Hendrick’s plan when Hunt tells him that it will result in nuclear holocaust, not just a war that he can profit from.

The IMF team manages to prevent the missile from detonating after it is launched and it falls harmlessly into San Fransisco Bay when Hunt kills Hendricks during a spectacular fight in a vertical parking garage. The Russian agent Sidorov (Vladimir Mashkov) sees Hunt deactivate the missile, thereby exonerating the IMF of the Kremlin bombing.

In Seattle, we learn that Luther (Ving Rhames) was the mysterious helper that Hunt was corresponding with electronically throughout the film and that Hunt’s wife (Michelle Monaghan) is still alive. Her death was a hoax to allow Hunt to infiltrate the Russian prison to try to find out who was plotting the Kremlin bombing. Brandt no longer feels responsible for her death and joins the IMF on their mission to infiltrate “The Syndicate” (an homage to the TV Series, where this group was a frequent adversary to Peter Graves’ IMF). 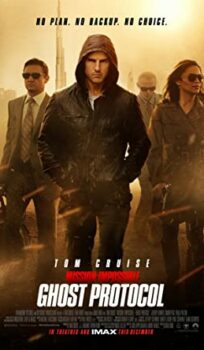