The IMF is deemed unnecessary by CIA Director Hunley (Alec Baldwin) and a congressional committee while grilling Brandt (Jeremy Renner) about the IMF’s apparent obsession over The Syndicate, which the director and committee believe doesn’t even exist. Therefore, all IMF assets are to be absorbed into the CIA, with Brandt and Benji (Simon Pegg) working for Hunley. Ethan (Tom Cruise) is in hiding and Luther (Ving Rhames) has quit.

Ethan discovers that many of the Syndicate’s members are former agents from all over the globe, all who have been presumed dead or missing. They are led by a former British agent name Lane (Sean Harris), who is using another British agent, Ilsa Faust (Rebecca Ferguson) to hunt Ethan and retrieve data previously stolen by a former syndicate member.

Benji and Brandt arrive to help Ethan and so does Luther. Once the data is recovered by Benji, Ilsa steals it and flees. Actually she is still working for the British government but her handler Atlee (Simon McBurney), the head of Mi6, is the one set up The Syndicate, unbeknownst to the Prime Minister. He coverly deletes the data off the drive before returning it to Ilsa and telling her to return it to Lane (pretty much ensuring her death).

The data drive can only be unlocked by the PM himself, so Ethan hatches a plan to get to the Prime Minister before Lane does. Brandt calls Hunley and expresses doubts about Ethan’s stability, but it’s all a ruse. Ethan uses a mask to pass as Atlee, gets the PM to verbalize the phrase that unlocks the the drive, subdues the real Atlee and allows Hunley to take credit for exposing Atlee as founder of the Syndicate and saving the Prime Minister’s life.

Lane has kidnapped Benji and Ilsa is with him in a cafe while Lane communicates remotely; Benji is wired with explosives. Ethan tells Lane that the disk is destroyed and that he alone memorized the data (banking account numbers totaling over 2 billion dollars). Lane allows Benji to go free and Ethan & Ilsa fight off many of Lane’s henchmen. Eventually an injured Ethan is being pursued by Lane alone, and Ethan falls down an open manhole. Lane jumps in and is ready to shoot when a bulletproof glass box encloses him (Luther and Brandt’s work).

Ilsa thanks Ethan and they part. Hunley goes back to the congressional committee and explains that he HAD to pretend that the IMF was unnecessary because of the delicate nature of the Syndicate operation, which was successful. The IMF is reinstated, and Brandt calls Hunley “Mr. Secretary” implying that he is their new superior. 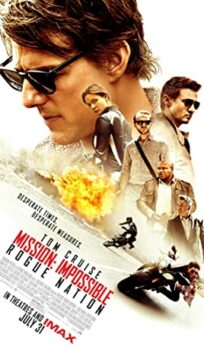