In the late days of World War II, Lt. Doug Roberts (Henry Fonda) is second in command on a naval cargo supply ship in the Pacific.  He dropped out of medical school to join the navy, and is frustrated that he has never seen action.  The captain (James Cagney) is a petty tyrant who is completely dependent on Roberts to run the ship.  Every week Roberts requests transfer to a combat vessel, and every week the captain blocks his request.  The ship docks in a Polynesian island, but the captain refuses to grant the men any shore liberty.  The men are desperate after months at sea.  The captain offers Roberts a secret deal, leave for the men if Roberts promises to never request a transfer again, and to treat the captain respectfully in front of the crew.

At first, the men are appalled by the change in Roberts’s behavior.  When the captain leaves the microphone on in his cabin, they learn about the secret deal, where Roberts gave up the one thing he most wanted for them to get liberty.  They forge the captains signature to get Roberts transferred to a combat destroyer.

Five weeks later, the new 2nd in command, Ensign Pulver (Jack Lemmon) gets a letter from Roberts telling how happy he is on the destroyer.  He has already been in 4 battles.  Further down in the mailbag is another letter informing them that Roberts was killed in action just after writing to them. 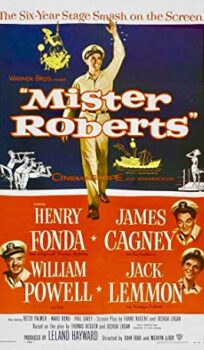