SHORT VERSION:
After Johnny tells Keith that he wants nothing more to do with his stolen credit card ring, a series of events occur that results in Keith and his thugs Lloyd and Eddie kidnapping his brother Seymour. When the thugs break into Johnny’s apartment to try to take him as well, Johnny sees them from the street and hurries over to Amber’s place. He fills her in on Keith’s entire credit card operation and his unwilling part in it, and she offers to help take Keith down by procuring evidence for him from the Dynasty Club’s computers.

As they are trying to get the evidence, Keith, Lloyd, and Eddie show up with Seymour, and in the ensuing fight, Johnny and his brother get Eddie killed and knock out Keith and Lloyd. They and Amber then run into the parking garage and bump into an arriving Lt. Walsh, who recently found out about Johnny’s involvement with the stolen card ring and came here looking for some answers. Keith then suddenly appears and tries to shoot Johnny, but Walsh shoves him aside and takes the bullet in his arm. Keith then kidnaps Seymour again and drives off with him in his car, and Johnny gives chase.

As Johnny is pursuing Keith, Seymour manages to escape the car, and the chase ends when Johnny and Keith reach a salt factory. They have a brawl that goes into one of the buildings and onto an upwards-moving conveyor belt, where Johnny eventually tears one end of an electrical cable loose and wraps it around Keith’s neck. When they both fall off the conveyor belt, Johnny safely lands in a huge mound of salt below while the cable fatally snaps Keith’s neck.

Johnny quits being a scam artist and continues his relationship with Amber.

LONG VERSION:
In an effort to impress Amber (Stacey Dash), Johnny (Damon Wayans) begins stealing deceased people’s credit cards from his mailroom job at the Dynasty Club so he can make improvements to his wardrobe (as well as the wardrobe of his brother Seymour [Marlon Wayans]) and also enjoy some of the other finer things in life, and one night, he finally makes a move on Amber by sharing a passionate kiss with her. However, that same night, Keith (John Diehl) has his henchmen Lloyd (Kevin Casey) and Eddie (Quincy Wong) murder Johnny’s supervisor Chris (Mark Beltzman) based on his belief that Chris was going to become a liability for his stolen credit card ring, due to the fact that he had been interrogated by Lt. Walsh (Joe Santos) during his investigation of a murder linked to the Dynasty Club. However, the henchmen fail to take a book containing receipts of the cards Chris used, which Walsh gets a hold of.

The next day, Keith has Johnny come into his office and reveals to him that he knows he has been stealing credit cards, but he had actually baited him with those cards, after having checked out his background and discovered that he is currently on probation for a past scam. Keith then blackmails Johnny into getting him to look through returned credit cards and bring him ones bearing the names on a list he then gives him, in exchange for not having him arrested. After leaving Keith’s office, Johnny learns of Chris’ murder from his co-workers upon his return to the mailroom, and then Keith comes in and says that Johnny will be taking over Chris’ vacant post. Johnny (correctly) suspects Keith of having something to do with the murder, and he later tells Seymour that Keith caught him and is blackmailing him. Then, when Johnny meets with Keith outside a warehouse and gives him the cards he told him to find, Keith brings him inside and shows him the full extent of his stolen credit card operation and essentially tells Johnny that he is not done with him by a longshot; he is now working full-time for him in his illegal enterprise.

Johnny goes on a spending spree over the next couple of weeks, buying things for Keith’s operation and for himself, and he also showers Amber with gifts and takes her out to nice places as their relationship grows into romance. However, while he and Amber are out on a double date with Seymour and Johnny’s co-worker Charlotte (Almayvonne) one night (though Charlotte’s attraction to Seymour is quite one-sided), Amber questions him about where he has been getting the money to do all of these things, but he won’t give her a straight answer. Seymour gets drunk and ends up sleeping with Charlotte back at his and Johnny’s apartment, but the next morning, he tricks her into leaving, hoping that he will never have to see her again. That same morning, Johnny goes to Keith’s office and tells him that he wants out of his scheme, then departs.

Keith retaliates swiftly; Seymour gets arrested after he attempts to use a credit card and it registers as stolen. After Seymour is roughly interrogated by two detectives, he tells them – likely to protect Johnny – that he got the card from Keith. Those same detectives then decide to use Seymour in a sting operation on Keith without Walsh’s authorization. Seymour meets with Keith and offers him a potential deal with the credit cards, but when Keith denies having anything to do with stolen cards, Seymour tells him that Johnny told him all about his operation. Keith grabs him and tells him that he knows he is trying to set him up, then rips his shirt open to find the police wire taped to his chest before he, Lloyd, and Eddie kidnap him. That night, as Johnny is making his way towards his apartment building, Lloyd and Eddie break into his home intending to kidnap him as well. He spots the goons’ silhouettes through the closed window drapes and runs over to Amber’s place, where he gives her all the details on Keith’s illicit activities and his unwilling part in it. When she tells him that he has to go to Walsh about this, he replies that he wants to get out of this mess by himself because he believes Walsh will just chastise him for screwing up the first legitimate job he ever had. She tells him that he will need evidence, and she can help him procure it from the computers at the Dynasty Club, so they both head on over there. Walsh – after learning about the unauthorized sting – then enters Johnny’s apartment, and after he finds evidence of the break-in as well as card receipts on the kitchen table, he departs for the Dynasty Club as well to get some answers.

As Johnny and Amber are trying to get the evidence from Keith’s office, they see Keith entering the building over the security cameras along with Eddie, Lloyd, and Seymour, so they exit the office and head down a back hallway leading to a mail delivery room. Keith has Lloyd take Seymour into an office while he and Eddie search for Johnny, and Johnny decides to send Amber away while he goes back to get Seymour, but Amber soon returns for him. Johnny and Seymour manage to get the better of Keith and his men in the ensuing fight, getting Eddie killed and knocking out Lloyd and Keith. They and Amber then run into the parking garage, where they bump into an arriving Walsh. As Walsh chides Johnny for going and getting himself involved with something this illegal, Keith suddenly appears aiming to shoot Johnny, but Walsh shoves him aside and takes the bullet in his right arm. Keith then kidnaps Seymour again and forces him into his car before driving away. Walsh encourages Johnny to go after him, so Johnny tells him to stay with Amber before taking off.

Johnny pursues Keith, first in a van and then by piggybacking on a train’s caboose after he crashes it, and Seymour manages to escape the car during the chase. Johnny then jumps down from the train onto a delivery truck and then onto the roof of Keith’s car, and he rides on it until they bust into a salt factory. Keith collides with a big pile of salt, which makes Johnny roll off the hood onto the ground, and then Keith chases Johnny until Johnny makes him crash the car against a bulldozer blade. When Johnny sees that Keith appears to have died from the impact, he goes into the car to check, only to find out that Keith is playing possum when he suddenly shoots him in the left shoulder. When Keith steps outside to finish off Johnny, he wastes one shot before finding out that that was his last bullet when he tries to deliver the killing shot and gets nothing. He and Johnny then have a brawl that goes inside one of the buildings, and he knocks Johnny onto an upwards-moving conveyor belt. As they fight some more, Johnny tears one end of an electrical cable loose and wraps it tightly around Keith’s neck, and when they fall off the end of the conveyor belt, Johnny safely lands in a huge amount of salt below while the cable fatally snaps Keith’s neck.

The next day, Seymour goes to the hospital to visit Johnny and finds him and Amber kissing. Seymour tells him of another scam he thought up for them that involves suing the Dynasty Club, but Johnny replies that he is done with being a scam artist. Amber tells Seymour that he needs to settle down, and Johnny says that he knows a girl who can help with that. An angry Charlotte then comes out from behind a nearby curtain, and Seymour takes off running while Johnny and Amber resume kissing. 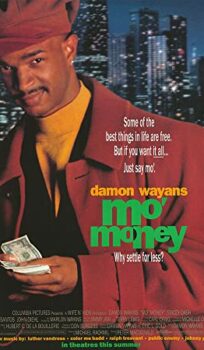