Unlike the 1930 version, John Huston’s 1956 film sticks fairly close to the Melville original. Yet, even Huston and his co-screenwriter Ray Bradbury made some changes here, especially the ending. Unlike the book, Royal Dano’s Elijah prophecizes that the Pequod’s men will one day smell land where there’s none to be seen and Ahab will die, but will rise again and all the crew save one will follow him.

And the prophecy comes true: unlike the novel where Ahab harpoons Moby and gets yanked into the sea by the neck when he tries to clear a fouled line, Gregory Peck’s Ahab climbs onto the white whale’s back after the latter destroys his whaleboat and crew and tries to stab Moby to death. He stills drowns, but as Moby breaches Ahab’s dead arm beckons the survivors of the attack.

Ironically, it’s Leo Genn’s Starbuck, the one crew member who opposes Ahab’s quest, who spurs the others on to kill Moby. And Ahab has left the Pequod in the hands of its cabin boy Pip! (Melville has Starbuck aboard the Pequod at the book’s end)

No matter: as in the book, a ticked-off Moby rams and sinks the Pequod and annihilates the remaining crew, leaving only Richard Basehart’s Ishmael to survive, floating on the coffin made for his perished harpooneer friend Queequeg until the Rachel, searching for her captain’s lost son, picks him up. 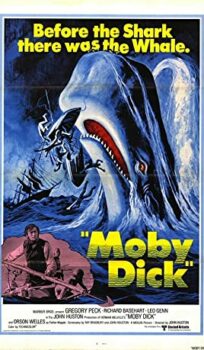