This classic was either Chaplin’s last silent movie or first talkie, depending on how you look at it.  Befitting its theme of the dehumanization of man by the industrial revolution, the only voices we hear are from mechanical devices like radios and intercoms. The characters are silent with title cards. Maintaining that theme, none of the characters have names, they are all credited as “a factory worker”, a mechanic, or a gamin (an old word meaning a street urchin).

Charlie Chaplin is a factory worker. He can not keep up with the insane pace of the conveyor belt. His boss even tries a contraption to pour soup into his mouth so they won’t have to give workers a lunch break.  Chaplin has a nervous breakdown from the stress, and is sent to a mental hospital.  After his release, he is arrested in a case of mistaken identity, where they think he is the leader of a mob of communist agitators.  While in jail, Chaplin saves the warden from an escape attempt.  Chaplin is pardoned and freed.

Paulette Goddard (the gamin) steals to feed her orphan little sisters. She is arrested for stealing bread, but Chaplin rescues her and takes the blame himself.  They escape and live in an abandoned dilapidated shack. Chaplin is a failure at every job he tries, and is frequently arrested for accidental mishaps.

During one of Chaplin’s jail stays, Paulette makes money singing on the street corner. She attracts a crowd. A local cafe owner hires her to sing in the cafe.  When Chaplin gets out of jail, she gets him a job as waiter.  He fails as a waiter, and is put on trial as a singer.  Chaplin is a hit as a singer.  However, the police are still after Paulette from her prior escape, and catch up with her at the cafe. Chaplin and Paulette have to run of with the police in pursuit.  The movie ends with the two of them walking off into the desert, arm in arm, to start a new life somewhere else. 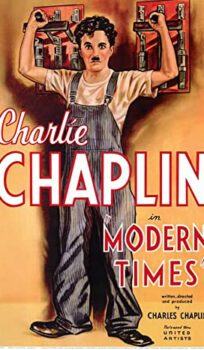