Victor Marswell (Clark Gable) is a big game hunter in Africa who captures animals for zoos, circuses and private collectors, and leads rich people on safaris.  On returning to camp one day, Eloise “Honey Bear” Kelly is in his shower.  She is a beautiful young “gold digger”, who was there to meet a rich Indian maharaji on safari.  Kelly is disappointed to learn the maharaji left a week ago, and very upset to find out that a boat only comes once a week.  Kelly is stuck there for the week.  During that week, there are some sparks between Kelly and Marswell, but nothing really happens.

One week later, the boat returns with Marswell’s new clients, Donald and Linda Nordley (Grace Kelly).  Donald is an anthropologist who wants to study gorillas in the wild.  Kelly leaves on the boat, but is back late that night.  The big boat has broken down 3 miles upriver, they bring her back in a rowboat.  With the big boat broken, Kelly is stuck there.  They have no choice but to take her along on the gorilla safari.  Linda is very taken in by the rugged, strong Marswell, and a romance blossoms.  Kelly was originally not interested in Marswell, but is not willing to let Linda have him.  Donald remains completely clueless, even though the porters tell him he should  be spending more time watching his beautiful wife and less time watching gorillas.  Donald never wonders why Marswell and Linda take so many long moonlight walks by themselves.

Marswell intends to tell Donald everything.  However, before he can, young Donald starts talking about how much he admires Marswell and wants to be like him.  Donald also talks about how devoted and dependent he is on his wife.  Marswell decides he can not do this to Donald.  Marswell and Kelly start drinking and carousing.  When Linda shows up, Marswell ridicules her and implies that he has affairs with many wives on safaris.  It is all an act to drive her back to Donald.  An enraged Linda grabs a gun and shoots, hitting Marswell in the arm.  When everyone comes running, Kelly tells them that a drunken Marswell made advances at Linda, and Linda shot him in self defense.

Instead of suspecting the affair, Donald ends up overjoyed at the impeccable devotion of his wife.  Donald and Linda go home happily together.

Marswell asks Kelly to stay with him and go to the mission priest to be married.  She does. 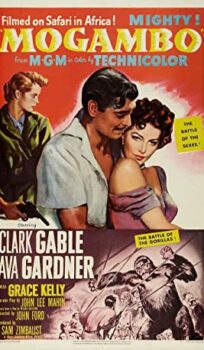