Pooper:
The kids incapacitate and tie up their parents. They want to release their parents, but it doesn’t appear as though the murderous impulses of their parents will ever cease.

Long Ending:
The movie opens on an upper-class household. Father Brent (Nicolas Cage) is having a severe midlife crisis, but particularly enjoys spending time with his young son Josh (Zackary Arthur). Mother Kendall (Selma Blair) is feeling unfulfilled, having recently been laughed at by her former boss when trying to return to work after raising her kids and being insulted and emotionally shut out by teenage daughter Carly (Anne Winters). Carly is a typical uncaring teenager – stealing money from her parents, distancing herself from her family, and wanting nothing more than to finally have sex with her boyfriend Damon (Robert T. Cunningham).

As the day goes on, static begins appearing on screens and parents hear a mysterious ringing noise. It is soon revealed that when a parent sees the static, they go crazy with one single-minded purpose – to kill their own kids (they don’t bear any menace to other children). The parents overrun the school and kill several kids. Carly witnesses her best friend get strangled to death by her best friend’s mom. Damon is attacked by his dad, but manages to get away after his father accidentally kills himself in the struggle. Josh witnesses their housekeeper kill her own daughter. And before she too becomes infected, Kendall watches in horror as her sister tries to kill her newborn immediately after delivering it (the doctors and nurses manage to prevent the killing of the newborn).

Carly flees to her house and arrives just before Brent. The kids are attacked by their father, but are spared when Damon arrives and causes a distraction. Brent knocks out Damon as his own kids barricade themselves into the basement. When Kendall arrives home, she tries to saw open the basement door, but is shot in the shoulder by Josh (who knew Brent had kept a gun he recently purchased downstairs). The parents eventually force the kids out by filling the basement with gas (although Brent is caught in a booby trap set by the kids that ignites the gas when he opens the basement door). Another struggle ensues during which a revived Damon is thrown off the second floor of the house by Kendall. Throughout it all, Carly apologizes for her bad behavior and we see flashbacks to tender moments between parents and children.

Eventually, Carly and Josh are cornered by their parents. Before the parents can strike, the doorbell rings and the grandparents (Brent’s mom and dad, cameo by Lance Henriksen) enter. An all out battle ensues, with various family members trying to kill each other. Ultimately, Brent ends up killing both his parents with his long-unused sports car (which he had bought from his dad) while knocking himself out in the process. Kendall knocks out Carly with a meat mallet and is about to kill her when she is knocked out by Damon who is miraculously still alive.

The film ends with Kendall and Brent waking up to realize they are tied up in the basement. Carly, Josh, and Damon watch from nearby. Kendall claims that she no longer suffers from her homicidal urges. Carly and Josh both say they still love their parents, but that they don’t trust them. Brent responds that while he loves his kids, their behavior just makes him want to kill them (suggesting their murderous impulses will never go away). 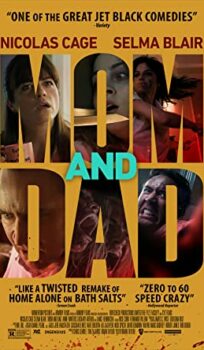