Joan Crawford (Faye Dunaway) is an accomplished actress who after years of success but being single, adopts a daughter, Christina and a son, Christopher.  The movie tells the story of Christina’s upbringing under the sometimes-tyrannical rule of her emotionally unstable mother.  Christina’s upbringing is difficult; her mother beat her with a hanger on one occasion for hanging her clothes on wire, not cloth, hangers.  She takes all of Christina’s dolls away from her and makes her give away all of her birthday gifts to orphans  Christina is sent to boarding school for a few years but when she gets caught in a compromising position with a boy, Joan orders her home.

Eventually, Christina (Diana Scarwid) finishes college and becomes an actress and manages a strained relationship with her mother.  When she becomes ill and is unable to film for a few days, her aging mother, whose career is all but over, takes her place in a popular soap opera.  Years later, Christina accepts a lifetime achievement award on behalf of Joan. Joan eventually dies but when her will is read, she had made no provisions for Christina or Christopher, essentially leaving them out of any inheritance. 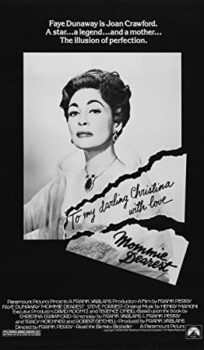