When Eva (Thora Birch) discovers that Dodger is a sticky-fingered thief, she puts him through some training to make him unlearn his thievery skills.

Azro (Harvey Keitel) eventually figures out that Eva has Dodger, and he follows her to a pet store where she keeps Dodger during school hours. Once she takes her leave, he goes in and steals Dodger back, and she learns of Dodger’s capture when she comes by after school to pick him up.

She decides to tell her mother Amy (Mimi Rogers) and stepfather Tom (Christopher McDonald) about him, but shortly upon arriving at home, she discovers that they have found a bunch of stolen items that Dodger had kept that she was unaware of, and worse, they believe that she has stolen them. She comes clean with them about Dodger and that he was the real thief, but they don’t believe her at all. Eva’s father Peter (Kevin Scannell) stops by soon after and learns of the situation Eva has found herself in.

Meanwhile, Azro takes Dodger to see the mobsters Drake (Robert Miranda) and Charlie (Victor Argo) so he can showcase Dodger’s thieving skills to them and then to their boss. Unfortunately for Azro, Dodger shows that he won’t steal anything anymore, which puts him in hot water with the mobsters. Realizing that Eva has changed Dodger, he angrily goes off to confront her when Drake and Charlie momentarily leave to get their boss.

Azro picks up his son Mark (Adam LaVorgna) to help him calm Dodger down, but Dodger soon escapes from Azro’s trailer and dashes into the town park. A passerby tells Azro and Mark about his escape, so they give chase. As Dodger runs, he is spotted by Eva’s friend Katie (Remy Ryan) – the only other person aside from her baby brother Jack (Adrian & Julian Johnson) that Eva let in on Dodger – and she phones up Eva to let her know that she spotted him. Eva proceeds to write a note for her family saying that Katie told her that she saw Dodger in the park and she has gone there to rescue him, and she will never lie to them again. She then sneaks out the front door and heads for the park.

Dodger climbs into Eva’s bathroom window moments later and then goes into her bedroom, and Jack sees him before he hides under Eva’s bed. He brings Amy into the room, and then says “monkeys”, his first word. She brings Tom, Peter, and her other daughter Tessa (Alison Elliott) into the room and gets Jack to say the word again, and she wonders if Jack might be trying to tell them that he saw a monkey. Jack goes underneath the bed and makes Dodger come out for all to see, and they realize that Eva had been telling them the truth. Amy, Tom, and Peter head to the park with Dodger along with one of Tom’s fellow police officers, and along the way, Amy points out to Tom that Dodger isn’t making him sneeze. He rationalizes that, since Dodger has lived with them for so long, he must have gotten used to him.

As they are en route, Eva crosses paths with Azro, who berates her for “brainwashing” Dodger and then forces her to help him find him. When her parents arrive, Dodger secretly relieves Tom of his revolver and takes off ahead of them. He finds Eva and Azro and uses the gun to make Azro unhand Eva and then keep him at bay. Azro runs when Eva’s family and the cop show up, but when he gets back to his trailer, he finds Drake and Charlie waiting for him. However, Tom arrives on the scene moments later, forcing the mobsters to flee and sparing Azro from their wrath. Tom then places Azro under arrest and finds some stolen items on him, a few of which belong to Amy.

As Eva pleads with her parents to let her keep Dodger, Mark shows up. He eventually decides to let Dodger choose whom he wants to stay with, and proceeds to lure Dodger over to him by slyly offering him a treat. As he is being taken away, Dodger quickly comes to regret his decision, and while Mark is busy calling his mother from a payphone, Dodger gets himself free from his leash and runs back to Eva, and the two hug.

The movie closes with Eva bringing Dodger and Jack to her class for show-and-tell day. 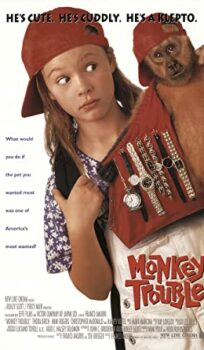