Pooper:
Sully & Mike get kicked out of college, become best friends, and start working in the mailroom at Monsters Inc., working their way up to the positions that they had in the first movie.

Long Version:
Mike goes to Monsters Inc. on a school field trip when he is very little.  While on the tour the kids see the “Scarers” walking down the hall.  One monster wearing a Monsters University ball cap talks to the kids and gives his hat to Mike.  Fast forward and Mike has enrolled in Monsters University.  He ends up being roommates with Randall (whom he helps by letting him know to not wear glasses as they give him away when he disappears).  Mike is determined to be the best “Scarer” at school and studies very hard.

Sully sneaks into Mike’s room mistakenly (after stealing a rival colleges’ mascot pig).  A chase of the pig ensues and Mike cleverly cathes the mascot in a trash can by hitting it with a football.  The “cool” fraternity Roar Omega Roar (ROR) likes that Sully stole the mascot and let him pledge.  Mike gets a flyer for the Scare Games.  Mike is angry that Sully got the credit for catching the pig and a rivalry between the two begins.

While challenging each other during the final.  They accidentally knock over the canister with Dean Hardscrabble’s record scream canister which breaks and releases the scream it contained.  They both fail their final exam and are kicked out of the Scare program.  The fraternity kicks Sully out.

At the Scare Games, Mike challenges the headmaster that if he wins the games, she will put the whole team in the Scare program.  She requests that if he loses, that he leave the college.  They both agree.  He needs a team so he chooses the Oozma Kappa (OK) fraternity and because they need 1 more player (and the deal), Sully joins up.  They become roommates and have to try and learn to work together.

As the fraternity barely survives each challenge and advances, they learn to work together as a team.  Before the last challenge, Mike takes them Monsters Inc. to show them that every “scarer” is different and that they can win.
The last challenge is a face off scare room test.  Each team player does their best scare and it counts toward the total team score.  Sully and Randall face off and since Sully wins the round, Randall mutters “that is the last time I lose to you” (referencing his jealousy in the first movie). Mike goes last and wins the challenge for the team.  Everyone at school celebrates and after everyone is gone, Mike notices that the scare meter has been tampered with and set to the “easy” setting.  Sully admits that he changed the setting so that they would win and Mike realizes that he was never scary.  The team walks away disappointed and sad.

Sully admits the cheat to Dean Hardscrabble and is expelled.  Meanwhile Mike goes to the door room (where the doors are created) and is determined to prove he is scary.  He enters the door and ends up in a summer camp dormitory.  The girls see him and are not scared.  An alarm goes off and the headmaster closes off the room after Sully runs inside the door.  She turns off the power to the door, so Sully and Mike have to work together (scaring the adults) to power the door from their side.  Both Sully and Mike admit to each other their failures and work together.  They do such an amazing job together (Mike the brains and Sully the scarer) that it emits power from the other side to power the entire room full of canisters and they barely make it back to the monster world before the door explodes.

Mike and Sully leave the college and the headmaster tells them that even though they cannot come back to the program, they both surprised her and she wishes them luck.  Mike and Sully become friends and decide to take a job in the mailroom at Monsters Inc. to get in the door.  They work very hard and continue to get promoted up the ladder as they excel in their tasks. (mailroom, janitor, floor cleaner and finally scarer).  The final scene shows them in the positions that they had in the first movie. 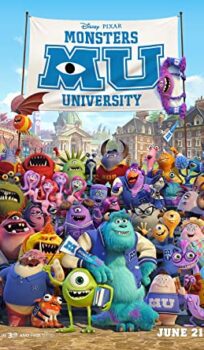