Gallaxhar captures Susan and extracts all of the Quantonium in her body making her normal again. General W.R. Monger gives B.O.B., Dr. Cockroach and Link jet packs with enough fuel to make it to Gallaxhar’s ship, but not enough to make it back. He lets them know that either if he doesn’t pick them up at a certain time it means he’s dead. Or late.

Gallaxhar uses the Quantonium to make thousands of clones of himself for an invasion army to take over Earth. One of the clones is escorting Susan to the incinerator when her friends show up disguised as Gallaxhar clones. They make it to the power core of the ship and Dr. Cockroach proceeds to hack through its security defenses via a Dance Dance Revolution type pad and sets the ship to self-destruct.

Gallaxhar reroutes all of the remaining Quantonium to his escape pod as the monsters try to make their escape. Susan makes it through the door before it shuts sealing her friends on the other side doomed to blow up with the ship. She fights Gallaxhar and reabsorbs the Quantonium making her Ginormica again. She rescues her friends who race to the outside of the ship.

Just when they think no rescue is coming, General W.R. Monger shows up riding a metamorphosized Insectorsaurus who now has a beautiful pair of butterfly wings. They fly away from the ship just as it explodes.

On the ground they’re finally greeted by the appreciation they deserve. Derek, Susan’s ex-fiance, shows up and excitedly tells Susan that he’s been offered a job on a network in New York if he can just get an interview with her. She flips him into the air and lets B.O.B. catch him and spit him back up. The team is then told that a mutated snail in France is slowly causing havoc and they set off to battle it.

After the credits, there’s another scene in the war room with General W.R. Monger as an official part of the team. The President gets up to get him a latte and accidentally pushes the button that releases all of America’s nuclear weapons. 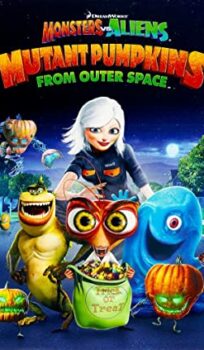