The film starts with this crawl.
Six years ago…NASA discovered the possibility of alien life within our solar system.  A space probe was launched to collect samples, but broke up during re-entry over Mexico.

Soon after, new life forms began to appear and half the country was quarantined as an INFECTED ZONE.  Today…The Mexican and U.S. Military still struggle to contain ‘the creatures’…

There is a quick confusing scene in night vision photography showing a military squad extracting a man and a woman from “an unsafe place”.  The squad is then attacked by an alien squid.  Facing disaster, the squad calls in an air strike which will probably kill everyone.

Flashback.
Andrew is a photojournalist in Mexico who agrees to escort Sam, the daughter of a magazine publisher, to the Mexican coast so she can get safely back to the U.S.  They miss the boat and are forced to go through the infected zone to get home.  During the night their party is attacked by monsters and only Andrew and Sam survive.  They continue on foot to the border, cross a giant wall and discover that the border town has been attacked and no one is there.  Andrew and Sam reach a gas station with electricity and call for help.  While waiting, two 50 foot high squid like creatures that float and have interior lights rendezvous at the station in what might be a mating ritual.  The idea is presented that the monsters might not be so monstrous after all and are only aggressive when provoked.  The monsters float off and Andrew and Sam start a mating ritual of their own.  The military shows up to extract them and we realize that this is the beginning of the film. 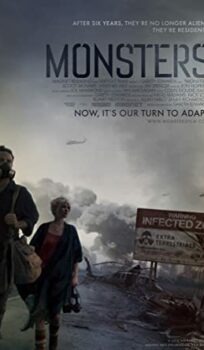