Earth’s moon falls out of orbit due to a Swarm of artificial intelligent nanomites taking over and destabilizing its core. Disgraced NASA astronaut Brian Harper (Patrick Wilson) joins his former friend and colleague, Director Jocinda Fowler (Halle Berry), plus conspiracy theorist KC Houseman (John Bradley), on a mission to destroy the Swarm, as Brian had previously encountered it on an earlier mission and was fired from NASA after telling his superiors about the Swarm.

The orbital shift causes disaster events like tsunamis and gravitational anomalies to hit Earth, killing many innocent people. Brian’s son Sonny rides with Jocinda’s son Jimmy and exchange student Michelle to join Sonny’s mom and her new family, while Jocinda’s ex-husband is given orders to nuke the moon. The crew learns that the Swarm was made by ancient humans, and after they grew too intelligent, they set up a base on the moon. The Operating System on the moon wants to help the humans. It instructs Brian to stay behind to plant the bomb to kill the Swarm, but KC chooses to sacrifice himself so Brian and Jocinda can return to their families. They blow up the Swarm, and Earth is saved as the moon returns to orbit.

KC’s consciousness is uploaded to the moon as the Operating System plans to use him for a greater purpose. 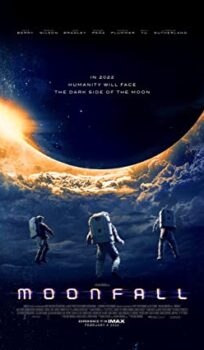