While on the run from the giant mosquitoes, Ray (Tim Lovelace), Megan (Rachel Loiselle), Parks (Steve Dixon), Hendricks (Ron Asheton), and Earl (Gunnar Hansen) find an abandoned farmhouse, and they decide to take refuge in it and board up every window and door to try to keep the mosquitoes from getting inside. That night, the bugs attempt to break into the house, and as the quintet are fighting them off, they hear a noise coming from the basement. Parks and Hendricks investigate it and find an unchecked room. When they go inside, they discover that it contains a massive quantity of mutated mosquito eggs, indicating that the farmhouse is the mosquitoes’ breeding ground. A newly-hatched mosquito then comes after them, but they manage to escape it by running back upstairs to the main floor and then locking the door on it. After the duo alerts the others about what they just found, the whole group soon formulates a plan to destroy both the mosquitoes and the nest simultaneously: They will break open the gas lines in the house and create a makeshift lighter that will be timed to ignite in three minutes, and then they will let the mosquitoes inside before barricading themselves in the kitchen. After that, they will escape to the roof in the kitchen’s dumbwaiter one at a time, and hopefully, they will be able to get off the roof and away from the house before the three minutes are up, after which the fire will set the gas ablaze and destroy the house, along with all of the insects and their eggs.

The first few steps of the plan go off without a hitch, and Ray and Megan make it to the roof in the dumbwaiter first. However, when Hendricks tries to use it, it breaks, sending him plummeting down the shaft to his death. Earl picks up a chainsaw he had been battling the mosquitoes with and goes down into the basement to save Hendricks, believing he is still alive. He finds himself in a last stand against some more newly-hatched mosquitoes and ultimately loses his life. Meanwhile, Parks gets cornered by mosquitoes who have broken into the kitchen, and he challenges them to attack him until he notices the refrigerator next to him. Ray and Megan jump off the roof and get away from the house just as the timer on the lighter hits zero, and the flame ignites the gas and blows the house – and everything in it – to smithereens.

When morning comes, Ray and Megan take a look at the smoldering house and agree that they ought to go home now, but then they hear coughing sounds coming from inside the house. They head in to check out the source of it, and they find Parks inside the refrigerator alive and virtually unharmed, having survived the explosion by taking cover inside the appliance. The trio congratulates each other on getting rid of the mosquitoes before Ray and Megan help Parks out of the ruins. 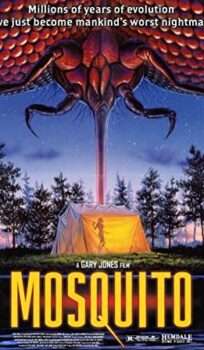