Pooper:
Luciana survives her ordeal at the party and helps Olga live through it as well.

Long Ending:
Luciana (Ana Asensio) is an undocumented immigrant living in New York City. She left Spain after the death of her child. Luciana struggles to make ends meet. She has almost nothing to eat and has just one day to pay her rent on the cockroach infested room she is subleasing. Luciana works hard at multiple low paying jobs.

Luciana tells her immigrant friend Olga (Natasha Romanova) about her desperate financial situation. Olga offers to let Luciana take a job she was planning to do. Olga says that a wealthy benefactor will pay Luciana to “mingle” at a party for other wealthy people. The job pays thousands of dollars in cash. Luciana agrees and Olga tells Luciana an address for the party. Olga finds ways to buy designer clothes at a discount (by damaging the material while trying them on) and prepares for the party.

The address Olga gave her turns out to be a restaurant in Chinatown. When Luciana arrives, the restaurant owner hands her a purse that is padlocked shut. He also gives Luciana another address where the party is actually located. He also tells her that she will not be able to bring in her phone or any belongings into the party.

The second location is a big warehouse. Luciana goes into the basement where she is cornered by two security guards (one of whom is Larry Fessenden). She finds a handful of other immigrants, including Olga, waiting inside a room. All carry identical locked purses like the one given to Luciana. Neither the women nor the guards will tell Luciana what is going on. It is obvious that Olga tricked Luciana into participating in something sinister.

Soon, a bunch of wealthy party guests file through the room where the women wait. The guests are led by a hostess (who has a foreign accent). The wealthy people place bets on the women before moving into a “game room.” The hostess takes one of the girls inside. The girl emerges sometime later, clearly distressed. However, the woman is paid handsomely and allowed to leave. A second woman is taken by the hostess to the game room. A short time later, they hear the woman scream. The hostess emerges in a rage and chastises Olga for the low quality of her recruits (showing that Olga is working as a recruiter). The woman who went in never leaves the room. Luciana unsuccessfully tries to escape.

The hostess returns some time later and tells Olga and Luciana that they are the next contestants. The pair enter the room, which is filled by the rich guests. A glass coffin is in the center of the room. Luciana’s purse is unlocked and a wrangler takes out a black box contained within. He opens the box to reveal a highly venomous spider. They explain to Luciana that she must strip naked, lay in the coffin, and allow the spider to crawl on her for 2 minutes. If the spider crawls off her body, it will be Olga’s job to ensure the spider reestablishes skin contact (with the intimation that Olga’s prodding would cause the spider to bite Luciana). The rich people have bet on whether the women will lose their cool and be bitten. With no choice, Luciana strips and gets into the coffin. The spider is released, but Luciana stays completely calm. The spider never leaves her body and, after two minutes, the wrangler puts it back in the box. Luciana sheds a single tear over her ordeal.

The roles are then reversed and Olga is forced into the coffin with a far bigger and more aggressive spider contained in her purse. Olga begins to panic. Rather than letting Olga get bitten, Luciana allows the spider to crawl on her arm (thus maintaining the skin contact required by the game). Luciana again maintains her cool until time expires and the spider is placed back in the box. The hostess praises Luciana’s strength and offers to let her be a recruiter. They then pay Luciana and allow her to leave. Luciana then walks out into the night, her future uncertain. 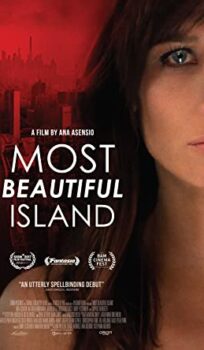