Short Version:
The son, Yoon Do-joon, is the real murderer. But his mother kills the only witness and another man is eventually arrested for the crime.

Long Version:
A mentally slow man, Yoon Do-joon, lives with his mother, simply called Mother in the credits. A young girl is murdered a he was the last person seen with her. There is a little circumstantial evidence linking him to the crime scene, but he is easily tricked by the police into confessing. The mother begins an investigation on her own to clear her son’s name. She finds out the young girl who was murdered was having sex for money with older men and was photographing these men with her cellphone, possibly for blackmail. She figures one of her clients killed her and if she can find the cellphone, she will find out who the guilty party is.

Meanwhile in prison, the son gets into a fight after a fellow prisoner calls him a retard. (His mother always told him if someone called him a retard, he should beat them up.) As a result of getting into the fight, he starts to remember things about the night in question, including a possible witness. He also remembers that as a kid, his mother tried to kill him as part of a murder suicide, because they were so poor. It was also implied that the poison she used is what caused his mental impairment, which is why she is now so overprotective.

His mother finally tracks down the possible witness, only to learn her son really was the killer. (The young girl threw a large rock at his feet to scare him away and then called him a retard. He then threw the rock back at her, accidentally killing her instantly.) The mother kills the witness to prevent him from going to the police and then burns down his shack to destroy all of the evidence. Shortly after her son is released when the police find another suspect to pin the murder on.

After getting out of prison, Yoon Do-joon seems more alive than before and his mother decides to take a holiday without him, but just before going away, he returns her acupuncture kit to her, which he found at the burnt out remains of the shack. Now they both know the other killed someone.

On a side note: There’s some debate on the nature of Yoon Do-joon’s mental impairment. Some say he was born that way and that’s why the mother tried to kill him and herself. Others think it was caused by the initial murder / suicide attempt. However, I think she was sedating him throughout the movie. She is seen giving him “Medicine” and that night, the night of the murder, he is particularly groggy and out of it. If I’m right, this would explain why he started remembering stuff while in prison. It’s not that the fight cleared up his mind. It’s just without the drugs his mother was giving him, he could think clearly. 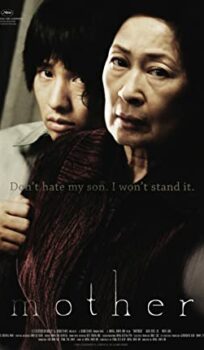