Gus (Jordan Christopher Michael) ends up getting stripped off his 8 hard-earned Motorama cards and tossed off the window of that 102nd. floor to what seems to be his death; but then, while falling, the torn sleeve of his jersey reattaches back and the eye patch from his injured eye flies away; then, he hits hard some body of water and we return to the moment where he was washing his face by that little creek at the beginning of the film; which means that everything that happened after that very moment was a vision (Or was it? Keep reading and you’ll see why).

He hits the road again, but then, he comes upon a “Play Motorama” sign and decides to desist on his quest; he pulls over, tosses away the driving-trainer devices he had built for himself and gets to hitchhike a ride to the Chimera station to where Phil (John Diehl), the honest attendant from earlier, worked.

Now, this is where it gets weird!!

We see Phil wrapped up in a full-body cast, barely able to move about and attend customers, and in dire need of help.  Gus decides to stay at the gas station and work with Phil, and -coincidentially enough- there is a uniform available just right for his size, and even a tag with his name on it (as if somehow Phil had been waiting for him).

Later on, some customer, who has just won a million dollars at a casino, arrives to pump gas and even takes a pack of bubble gum from Gus’s front pocket before driving away.  Instants later, due to being distracted from popping a bubble, the guy gets run over by the same white truck that run Phil over and left him handicapped.

The last scene shows Gus and Phil sharing a sweet moment, while a burning bill lands near them.  Then, the camera pans away to show the vast, desolated surrounding landscape and the credits roll.  It isn’t totally clear whether Gus somehow dreamed most of the events shown in the movie, and whether his destiny was actually to run away from his disfunctional home to become a gas station attendant. 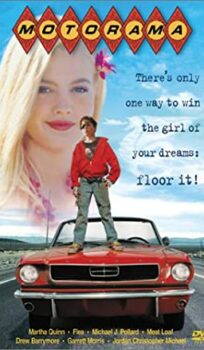