Pooper:
After Nancy is killed, Sherry, Mad Ax and Dog leave the compound and are free of the group’s control.

Long Ending:
The film begins with Sherry (Ellen Page), dressed like a goth-punk, being approached by a boy named Tiger (August Diehl), asking if she is interested in changing the world. Obviously attracted to Tiger and interested in what he has to say, she agrees to attend his group’s meeting that night. Tiger is a member of a group called SPARK (Street People Armed with Radical Knowledge). The group is led by a charismatic man named Harry (Eric Thal) who claims they are trying to help people on the street break their addictions and lead a productive life. Sherry is intrigued and agrees to join them on their road-trip along Europe.

She quickly befriends a female in the group named Nancy (Beatrice Brown), as well as a recovering drug-addict named Mad-Ax (Maxwell McCabe-Lokos) and Mad Ax’s friend, a young boy named Manson (Elliot McCabe-Lokos). The group is also accompanied by a medical doctor nicknamed Dog, who is treating the addictions of SPARK’s group-members. The group changes Sherry’s name to “BatGirl” and at first, everything goes well. They end up raising money for and feeding the homeless and bringing others onboard. Sherry grows skeptical of the group when Tiger and Harry berate her for calling her mother, Rose (Natasha Wightman). When Manson accidentally dies while dumpster diving with Mad-Ax and neither Tiger nor Harry will allow Manson to be buried or allow the other group-members to call the police, Sherry gets more skeptical of their true intentions.

SPARK attends a concert where most of the group uses drugs. Mad-Ax tells Sherry she is a good girl and should get out while she can. While high, Sherry (a virgin) may have been sexually assaulted by Harry. Upset with the callous response to Manson’s death and possibly being sexually assaulted by Harry, Sherry prepares to leave for home. To Sherry’s surprise, her mother Rose is at the concert looking for Sherry. Rose begins driving Sherry home, but the two get into a fight and Sherry leaves to head to the SPARK compound.

When Sherry arrives at the compound, she is surprised to see Rose at the compound waiting for her. Rose claims that she will allow Sherry to remain with SPARK under her supervision. The compound is in an isolated part of the country off the grid. They grow their own food and Harry dishes out punishment to those who disobey him, including putting disobedient members down a dry well for days at a time. Harry also humiliates many of his subordinates, saying he is the only one who loves them. Harry has shaved all his followers’ heads, but will only shave half of Sherry’s head as he says not all the group wants her. Later, Sherry confronts Harry and he ends up having sex with her (and goes prematurely). Afterwards, in front of the group, Harry notes that sex is against the rules and puts Sherry down the well for “seducing” him. Sherry also learns that Harry similarly took advantage of Nancy.

Sherry is upset when she discovers that Rose has joined SPARK and fully shaved her head. Rose also agrees to sell her house and give the money to Harry. Sherry learns that Nancy plans to leave with Mad Ax and confides this secret with her mother. Rose tells Harry, who confronts Nancy. Rose takes the blame for Mad Ax and Harry sends Nancy and Sherry down the well. Nancy forgets her inhaler and begins to suffocate. Sherry screams for help, but Harry refuses to let anyone go to their aid. Mad Ax finally disobeys Harry and pulls Nancy and Sherry out of the well. His efforts are too late and Nancy has died.

The group looks on stunned as Sherry and Mad Ax run to the SPARK van to leave. Harry tries to stop them, but Mad Ax hits him over the head with a glass bottle. Although Dog decides to flee with them, Sherry can’t convince Rose to leave. The three drive out of the compound with smiles on their face, ready to confront an unknown but surely brighter future. 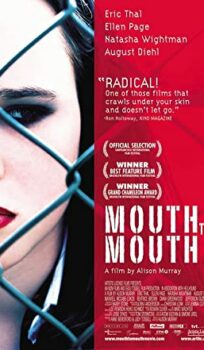