Note from Dan: I normally don’t include personal comments, but I’ll make an exception with this film.

The Pitch (The wrap around segment)
Charlie Wessler (Dennis Quaid) a mad screenwriter pitches several stories each more outrageous than the last to Griffin Schraeder (Greg Kinnear). Charlie eventually pulls a gun on Griffin to force Griffin to go to his boss Bob Mone (Common) to consider buying the film.

The Catch (Overtly bizzare)
Beth (Kate Winslet) discovers that while on a blind date with Davis  (Hugh Jackman) has testicles hanging down from his neck. Either Davis is obvilous to this or everybody else seems to ignore this.

Homeschooled (Offensive)
Kevin (Jeremy Allen White) is homeschooled by his parents Robert (Liev Schreiber) and Samantha (Naomi Watts). Robert and Samantha homeschool Kevin and give him all the experiences a normal kid would have. Including going to first base with his mom (yes you heard me correct). This segment ends with Kevin dating a doll with his samantha face on it.

The Proposition (Disgusting)
Vanessa (Anna Faris) wants Jason (Chris Pratt) to poop on her. After having a fight Jason get hits by a car and his poop goes over the pavement. Vanessa says this is the most beautiful thing anyone has ever done for her.

Veronica (Painful to watch)
Neil is working the night shift at a grocery store when his ex gf Veronica (Emma Stone) comes through the line. They soon have a sexual discussion about their relationship with is being broadcast over the intercom in which several eldery folks are listening in.

iBabe (wtf)
A company has released the iBabe which is an mp3 player that is the life size of a naked woman. The placement fan is in the genital region in which boys are trying to have sex with it. The boss (Richard Gere) is dumbfounded as to why boys want to have sex with the iBabe.

Superhero Speed Dating (One joke premise that is barely one joke)
Robin (Justin Long) and (Jason Sudeikis)  are at a speed dating event in which Lois Lane (Uma Thurmond), Supergirl (Kirsten Bell) and Wonder Woman (Leslie Bibb) all show up.

Happy Birthday (Another one joke premise that is barely one joke)
Pete (Johnny Knoxville) gives his roommate Brian (Sean William Scott) a captured Leprechaun (Gerard Butler) as a birthday present. The Leprechaun’s brother shows up in a pot of gold. Pete and Brian both kill the Leprechauns and it ends with Pete showing Brian a fairy that he has captured. The fairy will have sex for several pieces of gold.

Truth or Dare (Pointless)
Donald (Stephen Merchant) and Emily (Hallie Berry) do humiliating things to each other while on a blind date.

Victory’s Glory (Badly Done)
Set in 1959, Coach Jackson (Terrence Howard) all black team is set to play an all white team. Using vulgarity to sell a point that their black therefore they’re better than the white folks at basketball. The white team gets 1 point the whole game.

Beezel (A short that would’nt be worthy of DVD deleted scene)
Amy (Elizabeth Banks)  is dating Anson (Josh Duhamel) whose cat Beezel (an animated cartoon cat) is coming between them. Beezel eventually tries to kill Amy. Amy tries to do the same to Beezel in front of some small children. Amy then gets stabbed by plastic forks by the children in which Beezel acts all innocently. 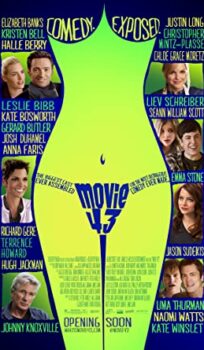