Longfellow Deeds (Gary Cooper) starts spending the fortune he inherited from his uncle  to help the many American farmers who have been impoverished by the Great Depression.

His uncle’s lawyer John Cedar  and his uncle’s other relatives are horrified by this, and seek to prove that Deeds is insane and not competent to control the money he’s inherited.

After finding out that Babe Bennett (Jean Arthur) is the reporter who has been printing stories making him look foolish, Deeds becomes extremely depressed. When he is taken to court, in a trial to determine his sanity, Deeds is too sad and lethargic to defend himself. The plaintiff’s lawyers bring forth doctors, as well as a pair of elderly neighbors from Deeds’ home town, who all testify that Deeds is crazy and should have his money taken away.

Ashamed of what she’s done, Babe Bennett stands up in court and proclaims her support for Deeds. This gives Deeds a spark of hope, and he begins to defend himself in his own folksy way. He proves that his own personality quirks (like playing the tuba) are no sillier than those of the judge, the doctors or the lawyers in court. He also shows that Deeds’ two elderly neighbors are themselves eccentrics who think almost EVERYONE else is “pixilated.”

Deeds’ defense is so successful that the judge declares him the sanest man who’d ever set foot in the courtroom. Deeds punches crooked lawyer Cedar, gets to keep the money, and wins the love of Babe Bennett. 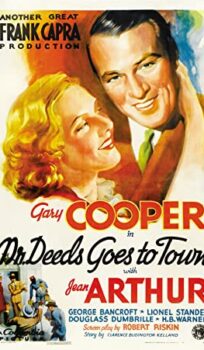