After a harrowing journey of traversing the Ukrainian countryside, which gave him the opportunity to witness and live, first-handed, the evidence of the imposed famine on everyone by the repressive Stalin regime -which was been denied and downplayed by the Soviet government itself, as well as the worldwide media of the time, not wanting to get into conflict with the Soviet Union-, Gareth (James Norton) ends up being captured by the Secret Police, briefly jailed along with six British engineers who were accused of espionage, and eventually released. He is brought to the presence of Minister Livitnov (Krzysztof Pieczynski), who attempts to blackmail him into recanting his entire story and “admitting having been wrong”, as a condition for the engineers to be released.

Having been expelled from the country, as he is taken to a vehicle that would take him to the train station for the trip back to Britain, he runs into Duranty (Peter Sarsgaard), who all but admits to being a lying hypocrite who, although bargaining Gareth’s release, just wanted to stay in the good graces of the Soviet government so he could live a life of opulence and debauchery under a regime where, meanwhile, millions of people were oppressed and coerced into silence, and eventually win a Pulitzer prize based on his work. He also spots Ada (Vanessa Kirby), who sees him, stunned, before he is hauled away.

Upon his return, Gareth struggles to have his story believed and taken seriously by fellow journalists, writers, and the political class he was acquainted with. Parallel to the events transpiring, we also get to see George Orwell (Joseph Mawle) finding the inspiration to create and publish his famed novel, “Animal Farm”. At the same time, Duranty got the upper hand and had the New York Times run a denial, discrediting Gareth’s allegations and asserting that “while things were far from ideal in the Soviet Union, it was absolutely false that anyone was starving to death”.

As a result of the shame he caused to the Soviets, his former employer, Prime Minister George (Kenneth Cranham) scolds him for his actions and severs all ties with him. He moves back to his father’s house in Wales, where he teaches at a local school and finds work at a newspaper that happens to be owned by famed businessman William Randolph Hearst (Matthew Marsh). Despite the opposition of his boss, he is doggedly driven to meet with Hearst, which he does. He provides Hearst with full details of his odyssey, thus cementing both men’s suspicions that Paul Kleb (Marcin Czarnik) could have been permanently silenced by the regime.

With Hearst’s help, Gareth finally gets to have his side of the events widely published, which causes a big uproar and allows the liberation and return of the engineers; he is, however, banned from ever returning to the Soviet Union. Sometime later, he receives a package from Ada, who commends him for his bravery and determination in staying faithful to the truth and lets him know she was living in Berlin, writing for a small independent magazine that, because of the comeuppance of the Nazi regime, would be eventually doomed to be shut down.

Gareth decides to engage in further traveling, this time around to the Far East, to keep looking for facts. The last scene has him walking away towards his new quest. As the film ends, title cards inform that he was kidnapped and murdered shortly before his 30th. birthday while traveling through Inner Mongolia with a travel guide who, unbeknownst to him, was secretly employed by the Soviets; this, no doubt, as revenge for successfully exposing their deceit to the world. Also, that Duranty, despite it being eventually proven that his Pulitzer-winning work was based on embellished and sugar-coated facts, never had his award revoked. 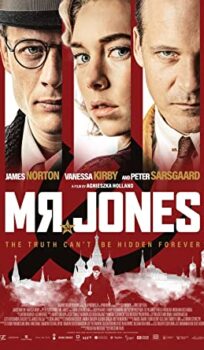