Pooper:
The penguins help Mr. Popper come to terms with his father’s absence in his life, reunite with his family, and convince Mrs. Van Gundy to give him control of her Central Park property. Mr. Popper keeps the property open to the public and he and his family fly the penguins back to Antarctica and release them back into the wild.

Long Ending:
Tommy Popper’s father was a famous explorer. Popper’s dad would send him souvenirs from all over the world, but was rarely home to spend time with him. As his dad always explained, the work opportunities were too good to pass up. Jumping ahead in time, we find an adult Mr. Popper (Jim Carey) working for a large property redevelopment corporation. He excels at his job and like his father, puts his career before family. He is recently divorced from his wife Amanda (Carla Gugino) and his two kids – Billy (Maxwell Perry Cotton) and Janie (Madeline Carroll) – don’t want to see him.

The partners of the company promise Mr. Popper that he can become a partner if he acquires the only privately-owned property in New York’s Central Park. The property is a restaurant owned by a notoriously difficult owner, Mrs. Van Gundy (Angela Lansbury), who will only sell to someone who can prove their worth. At the same time, Mr. Popper learns that his father passed away. To Mr. Popper’s surprise, his father left him six live penguins that he found on his journeys before he passed away. In the ensuing pandemonium after Mr. Popper unboxes the penguins, the letter accompanying the penguins is kicked under some furniture and remains unopened.

Mr. Popper calls up a local zookeeper named Nat (Clark Gregg) to collect the penguins. Before Nat arrives, Popper’s children visit and believe that the penguins are a birthday present. Over Nat’s objections, Mr. Popper decides to keep the penguins as he realizes he can use them to bond with his children. Mr. Popper also begins to repair his relationship with Amanda, whom he admits to his kids that he still loves. He also confides in Amanda that Mrs. Van Gundy’s restaurant is important to him as it was the place his dad spent time with him whenever he came home. Unfortunately, the penguins also cause him to lose focus at work.

Eventually, the penguins lay eggs. Mr. Popper becomes obsessed with seeing that the eggs hatch. He begins ignoring his job completely and misses several appointments with Mrs. Van Gundy (both to watch over the eggs and to spend time with his ex-wife and children). This results in his getting fired. Several chicks hatch, but one of them does not. Desparate to save the egg, Popper contacts Nat. When he arrives,  Nat says the it is too late and blames Mr. Popper for the loss of the egg. Mr. Popper relents and lets Nat take custody of the penguins, including the newly-hatched chicks. This upsets the children and Amanda, and Mr. Popper in turn distances himself from them once again.

Mrs. Van Gundy explains at the press conference that she remembered Mr. Popper as a boy eating at her restaurant with his dad and wanted to see if any of that charming boy remained. She says that watching him raise the penguins and place his family ahead of his job convinced her that the boy does still exist within him and that he has proven his worth. She awards him the restaurant and his firm offers to welcome him back if he will hand it over to them. He announces that he will keep the property and run it himself. His family (including Amanda) embrace him (and Pippi finds a boyfriend at the press conference). The film ends with Popper, Amanda and the kids in Antarctica, returning the penguins to their natural habitat. They watch as the penguin who lost her chick in Mr. Popper’s home lays another egg and they vow to come back and see the new chick once it hatches. 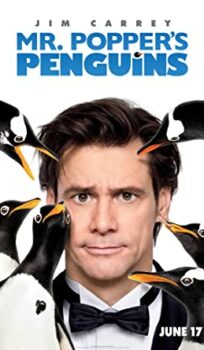