SHORT VERSION:
Whitman eventually takes Martha down to Los Cabos, Mexico to have a forced wedding with her at the St. Margaret of the Goats Church, but she is able to call Walter – the only person who hasn’t been fooled by Whitman’s nice guy façade – before they get there and urges him to come down to St. Margaret’s with a gun. When the wedding gets to the vows, Walter appears with gun in hand, but he knocks himself out while running down the aisle. The gun flies into the air and Martha catches it, and as she points it at Whitman while backing down the aisle, she tells him for the last time that their relationship is over before demanding for the keys to the R.V. they came in. Whitman still refuses to believe that they are through and moves in to hug her, and she turns her head and starts to fall backward, after which there is a gunshot.

After finishing telling this story to the Mexican cops, the cops are unsympathetic towards her, believing she intentionally shot Whitman, and they prepare to transport her to prison. However, Walter suddenly commandeers the truck she is placed in and takes off, then explains to Martha that Inga was the one who shot Whitman; she was positioned with a rifle on the balcony behind Martha with her accomplice Bob standing behind her, and she was trying to kill Martha, but Whitman took the bullet in his head when Martha fell. He adds that Bob himself told him this.

They then meet Bob out in the desert where he has a horse waiting for them to aid in their return to the U.S., and he says his goodbyes after telling Martha that, while he loves Inga, he couldn’t let her take the fall for Inga’s crime. Martha kisses Walter and thanks him for being there for her when no one else was, then chucks her engagement ring before they depart. Title cards state that they made it across the border, and they are now a couple and live somewhere in the U.S. under assumed names. Also, Inga gave up on Whitman and married Bob, and Whitman survived and returned to the U.S. after healing up, where he continues to look for love.

LONG VERSION:
As Whitman (Bill Pullman) continues to ruin both her professional and personal lives while fooling everyone around her into thinking that he is the nicest guy ever, Martha (Ellen DeGeneres) decides to get out of town for a while. However, as she is about to leave her house, Jack Tramonte (Dean Stockwell) – the private detective she hired to do a background check on Whitman and to also get Whitman to leave her alone – shows up. Martha chastises him for not doing his job in getting rid of Whitman, but she soon finds out that Whitman used his nice guy façade to buy him out when he encourages her to go to Whitman and also shows off some rings Whitman purchased for him. Jack then attempts to force Martha to come with him so they can see Whitman, but Martha hits him in the head and runs. Unfortunately, she gets hit by a truck seconds later and winds up in the hospital. Martha wakes up the next morning and is greeted by her sister Annie (Hope Davis), who has been watching her ever since she found out about the accident. Martha finds out from her that Whitman told their family that she had tried to kill herself, which Annie believes is because Martha thought she lost him, and he is now engaged to her. As Annie says that, she points out to Martha the engagement ring he put on her finger while she was unconscious. She then leaves when Whitman shows up to take care of her.

That night, Martha wakes up to find Whitman asleep at the foot of her bed, so she decides to quietly make her escape. She gets the hospital equipment off her and gets dressed, but while trying to get out through the window, she makes noise and wakes Whitman up. She dashes into the street and waves down a passing motorist so she can make a better getaway, but after jumping into the car, she discovers that its occupants are Whitman’s equally deranged ex-girlfriend Inga (Joan Cusack) and her accomplice Bob (Brad Henke), the former of whom had already warned Martha to keep away from Whitman and didn’t believe her when she said she dumped him. The duo brings Martha to a secluded spot and ties her down to a stone slab, and Inga covers her face with honey so she can unleash some ants on her to consume her. However, the plan quickly goes bust when she discovers that the ants are dead, thanks to Bob keeping them unfed for too long, so she opts instead to cut out Martha’s heart with her Swiss army knife. Before she can, Whitman suddenly appears with a shotgun, and he orders Inga to put down the knife. Inga refuses to comply, believing that Martha is in the way of their love, so Whitman shoots her in the arm. Inga orders Bob to not let Whitman take Martha, but Bob backs off quickly when Whitman threatens to shoot him as well. Bob escorts Inga away while Whitman unties Martha, though Inga warns Martha that she will get her.

Whitman carries Martha into an R.V. that he bought for them and introduces her to Nicole (Victoria Flores) and Cody (Jonathan Hernandez), the children of his mother’s housekeeper Consuela (Camille Saviola). He tells her that they are now their kids until they get kids of their own, a process that will start just as soon as they get married. He explains that, in six hours, their wedding will be taking place in the St. Margaret of the Goats Church in Los Cabos, Mexico. Martha tries to leave and beckons for the kids to come with her, thinking them to be victims like her, but the kids suddenly pull out handguns on her to force her to stay put (though we find out that they are really just water pistols).

Along the way to Los Cabos, Whitman discreetly drugs Martha with LSD. At a pit stop, the acid trip overwhelms her, so she goes into a bathroom to clear her head with an armed Nicole stationed outside the door. She then catches sight of a payphone in there and uses it to call her former co-worker Walter (John Livingston), the only person she knows who hasn’t been duped by Whitman, and she quietly urges him to fly down to Los Cabos immediately with a gun and meet her at St. Margaret’s. However, her whispering is just barely heard by Walter, and Nicole soon catches her and makes her leave, and it seems like Martha is defeated.

At the marriage ceremony, as Martha hesitates with giving a final answer to the vows, Walter shows up with gun in hand to rescue her. Unfortunately, as he runs toward her, he trips over his own feet and falls onto a pew, and knocks himself out. The gun flies out of his hand, and Martha catches it and aims it at Whitman. As she backs down the aisle away from him, she tells him that she misses her old, beautiful life before she met him and wants it back, and before demanding for the keys to the R.V., she states as firmly as possible that their relationship is over. Whitman still refuses to believe this and moves toward Martha to give her a big hug, but Martha turns her head and starts to fall backward, after which there is a gunshot.

The film then takes us back to the beginning, with Martha still in her wedding dress being interrogated by two cops in a Mexican police station, and she finishes the story by admitting she shot Whitman and why she had to do it. However, the cops are unsympathetic and believe she intentionally shot him, then they put her in a truck to transport her to prison. Suddenly, Walter pops up in the driver’s seat and takes off with her, and it is shown that he slashed one of the tires of the cops’ car so they can’t come after them. Martha tells Walter that he can’t help her escape from justice because she shot Whitman, but he reveals that she actually didn’t: Bob himself had told him that, when she had her head turned and fell, Inga – who had positioned herself with a rifle on the balcony behind Martha while Bob stood behind her – fired a shot at her, but the bullet struck Whitman in the head instead.

They then meet with Bob out in the desert, where he has a horse waiting for them, and he tells them that they had better cut across the country to get back to the U.S. instead of taking the main roads since the authorities will likely be watching those. He then tells them that he must get back to Inga, who has been doing tequila shots ever since the botched murder attempt. Martha gives him her thanks, and Bob says that, though he loves Inga, he couldn’t let her take the fall for Inga’s crime. He then drives away in his car, and Martha kisses Walter and thanks him for being there for her when no one else was. Martha then has Walter get on the horse after noticing that he is hobbling, due to him having twisted his ankle back at the church, and she throws away her engagement ring before they head off into the sunset. 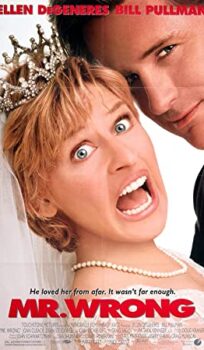