Queen Victoria (Judy Dench) remains in deep mourning for her late husband until a Scottish servant named John Brown befriends the lonely monarch.  When their relationship becomes fodder for anti-monarchist sentiments (she is dubbed Mrs. Brown in the press), he convinces her to leave seclusion and return to the public sphere.

Brown becomes increasingly worried about her safety (there are numerous attempts on her life, one of which he foils personally) over the next several years, eventually succumbing to pneumonia as a result of exhaustion.  While Victoria grieves, her children and courtiers (jealous of his influence over her) rejoice. 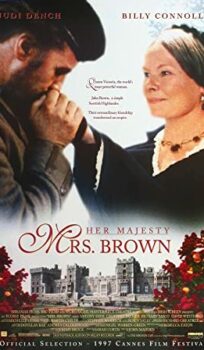