Hero’s (Kate Beckinsale) name is cleared when Don Jon’s (Keanu Reeves) men confess to his plot.  Thinking that she is dead, Claudio and the Prince (Denzel Washington) mourn for her and Claudio agrees to marry her cousin in penance for his unwitting part in Hero’s slander. At the wedding it is revealed that Hero is still alive and the two are reconciled.  Benedict (Kenneth Brannagh) and Beatrice (Emma Thompson), who have been tricked into realizing their love for each other, admit their feelings and agree to wed.  Don Jon is captured and his fate is left to be decided after the celebrations. 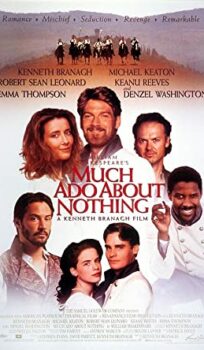