Mulan (voice of Ming-Na) saves her troop by burying the Huns under an avalanche of snow. Unfortunately, she is injured in the effort, and the fact that she is a woman is exposed. Rather than kill her as the law requires, Captain Shang (voice of B.D. Wong) simply banishes her as a way of repaying the fact that she saved his life. He leads the remnants of his troop as heroes into the Imperial City. After the army departs, the Huns, still alive, emerge from under the avalanche. Mulan sees this, and rushes to warn Shang and the rest of the citizenry, but nobody will listen. The Huns capture the Emperor, and lock themselves into the Palace. Mulan’s ingenuity leads her to figure out a way into the Palace, and Shang and her old army pals finally decide to listen to her, and follow. Inside, after much fighting, Mulan kills Shan-Yu (voice of Miguel Ferrer). She wins the praise of the Emperor (voice of Pat Morita), and is offered a post in his cabinet. She declines, wanting to return to her family. In the final scene, Shang arrives at the Fa home, presumably to ask for Mulan’s hand in marriage.
For the older crowd, one highlight of this film will be hearing June Foray, the voice of Rocky the Flying Squirrel, as Mulan’s Grandmother! 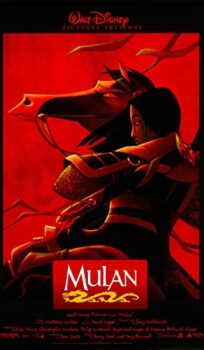