SHORT VERSION:
Mune, Sohone, and Glim venture directly into the Underworld to save the Sun from Necross, and while Mune and Sohone battle Necross and his minions, Glim is able to restore the near-dead Sun to its former glory, but she becomes badly melted by its heat and dies shortly afterwards. Mune ends up defeating Necross by using his magic dust to put him to sleep and then using his earlier-discovered special power as the Master of Dreams to get the better of him in the World of Dreams and extract and destroy the white corrupting snake from his heart that was the source of his evil. This causes Necross to turn back into his past benevolent self and then into a statue (which is what becomes of all Sun Guardians when their time is over), and the Underworld is transformed into a beautiful place. Sohone praises Mune for his heroism and calls him the most powerful Guardian of all time.

Mune and Sohone take Glim’s remains and rest them on a stone slab in Mune’s forest home, and Mune sculpts her back to her original form before putting a small piece of the Moon into her hand. He and Sohone then put the Moon and Sun back into the sky and get to performing their duties as Guardians, but when the Sun Temple passes by Glim’s resting place, the Sun’s light interacts with the Moon rock in Glim’s hand and causes her to be brought back to life. After passing by the Sun Temple and exchanging joyful greetings with Sohone, she finds Mune and joins him on the Moon Temple, and they share their first kiss.

LONG VERSION:
While Mune, Sohone, and a petrified Glim are swimming down the Giant Blue Hole towards the depths of the world, they wind up meeting the feared “lightning monster” who guards its entrance, who turns out to be Phospho, a former Moon Guardian. After explaining that Necross stole the Sun and they have to get it back, he takes them to the road to the Underworld. When they arrive, Phospho enables Glim to regain movement by using his powers to make her wax so strong that only the Sun itself can melt her.

As they all walk towards the chasm that marks the Underworld’s entrance, Glim asks Phospho about Necross, since he was there to witness his downfall. Phospho explains that Necross was a great Guardian of the Sun until he suddenly snapped and decided to keep the Sun all to himself (thanks to some evil ghostly white snakes of unknown origin corrupting his heart), which ended up forcing Xolal (Sohone’s predecessor) to fight him and smash him down into the Underworld. Glim asks Phospho why he didn’t face Necross himself, since, as the Moon Guardian, he was supposed to watch over the harmony of the planet, and Phospho replies that he was too busy with his duties to do it (in truth, he was too scared to face Necross and thus hid himself while Xolal dealt with him). When she then asks why he exiled himself after that, Phospho can’t take any more of her prying and departs. As the trio climb down the chasm, Mune suddenly hears the Moon Temple bellowing, so he goes back up and sees that the Temple is close by and is going berserk, plus the Moon is gone. Mune decides to tend to this problem, with Glim accompanying him, leaving Sohone to enter the Underworld alone.

Mune climbs up to the temple’s head and discovers that the magic dust that comes out of the fur on his arms is strong enough to pacify the beast, and then he and Glim go inside to find Leeyoon in a state of despair. He tells them of how the Moon ended up dying after he replaced Mune as Guardian, all thanks to Necross’s earlier manipulation of him (which started up the string of events that resulted in the theft of the Sun by Necross’s imps Spleen and Mox), so Mune decides to venture down into the World of Dreams through the temple’s trapdoor and get a new Moon from the legendary Moon Quarry. Mune and Glim head down together, and there, Mune discovers that his dust is the fuel for his unique Guardian power as the Master of Dreams when he uses it to bend the world to his will in order to vanquish a horde of nightmares that attack them. They get to the Moon Quarry and he carves a new Moon out of the rock, and while he and Glim are floating back up to the trapdoor with it, their growing attraction almost results in them kissing, but they emerge back in the temple before they can. After seeing that Mune’s mission was a success, Leeyoon apologizes for misjudging him and acknowledges him as the true Guardian of the Moon, then leaves peacefully. Mune and Glim then head for the Underworld with the new Moon, since it needs the Sun’s light to shine.

Amidst all of this, Sohone crashes into the Underworld, and he winds up becoming enveloped by the white snakes. They prey upon the darkness within his soul by mocking him for losing the Sun and calling him a terrible Guardian, causing him to slowly become corrupted by hatred. However, Phospho comes to his rescue, and he yells out to Necross that he will not let him spread his chaos this time. To that end, he gives his life to save Sohone by transferring all of his energy into him in order to calm him and return him to his normal self, and then he explodes in a flash of light and wipes out all of the snakes. After that, Mune and Glim show up with the Moon, and together they press on into the Underworld.

Shortly after Mune hides the Moon to keep it safe, Necross surprises the trio. Sohone orders Mune and Glim to get the Sun while he battles Necross, but as they make their way up to it, Mune is tackled by Mox and is forced to fight him. Glim is confronted by Spleen, but since he is far less evil than Mox, he ends up letting her continue on, and she reaches the Sun. After seeing Necross thrashing Sohone and Mune struggling with Mox, she begins blowing on the Sun to restore it to life, and though she eventually succeeds, she – not surprisingly – is badly melted by its heat. Mune defeats Mox and runs up to her, and before she dies, she tells Mune to save Sohone and defeat Necross, knowing that he has the power to do it.

Necross then appears and tried to stomp Mune flat, but Sohone catches his foot and orders Mune to flee. Just then, the Moon rises up with the Sun, and their combined light causes the powers of both Sohone and Mune to amplify. Sohone pushes up Necross’s foot high enough to send him falling on his back, and then Mune puts him to sleep with his dust so he can fight him in the World of Dreams, knowing that he has the advantage there. Mune effortlessly dodges Necross’s attacks, then dives into his chest and extracts and destroys the white snake that had corrupted him, transforming him back into his former benevolent self, and he gives Mune a nod of respect and gratitude for freeing him. Sohone then awakens Mune and shows him that his efforts have quenched the fires of the Underworld and turned it into a beautiful land, then he gives Mune his praise by calling him the most powerful Guardian of all time. We also see that Necross has solidified into a statue, like all Sun Guardians do when their time has passed, and Spleen and Mox are shown to have become beings made of grass and flowers, which only Spleen is content with.

Sohone and Mune return to Mune’s forest with Glim’s remains and rest them on a stone slab, and though Mune sculpts Glim back to her original state, she is still dead. Heartbroken, Mune breaks off a small piece of the Moon and places it in her hand before he and Sohone return to their respective temples, where they set the Sun and Moon back in the sky and begin their global journeys, restoring the balance of Night and Day. As the Sun Temple passes by Glim’s resting place, the Sun’s light interacts with the Moon rock in her hand and results in her being brought back to life. After looking at the rock, she takes off to find Mune, and she passes by Sohone along the way and exchanges joyful greetings with him. She stops at a cliff when she sees the Moon Temple approaching, and Mune spots her and picks her up. They share their first kiss while Sohone happily watches from afar. 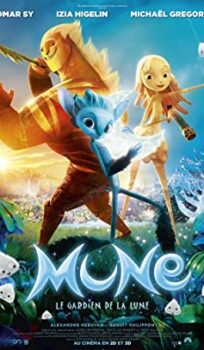