Claude (Vince Edwards) is a young man who wants big money fast, so he seeks work as a contract killer for the mob.  He does very well on several assignments. He is sent to LA, to kill a witness who is scheduled to testify against a mob boss.  He is very upset to discover the target, Billie Williams (Caprice Toriel) is a woman. He has major issues with women and does not function well with them.  Several attempts to kill her fail, to the great concern of the local LA mobsters assigned to monitor him, Mark (Phillip Pine) and George (Herschel Bernardi).

Billie is heavily guarded by the police and never leaves her house.  Claude reasons that “The human female is descended from the monkey, and monkeys are about the most curious animal in the world. If anything goes on, it just can’t stand it not to know about it. Same thing with a woman.” Claude has George shoot a flaming arrow to start a brush fire in front of the house, assuming Billie will want to see what is happening.  When the door opens, he shoots her with a sniper rifle.

That night, they learn that Claude killed a police woman, not Billie.  Mark and George are to kill Claude for failing.  Claude knows what will happen and kills them first.  Claude knows the mob will not leave him unless he succeeds.  He crawls through a drain pipe and comes up a grate next to the house.  He enters the house pretending to be a replacement police guard.  He stands behind Billie a long time but can not bring himself to kill her.  She yells.  He flees, but is shot dead by the police. 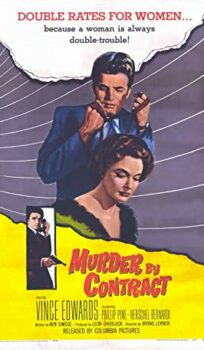