Murder on the Orient Express(2017)

SHORT VERSION:
Everyone participated in the murder.

LONG VERSION:
The kidnapping and murder of Daisy Armstrong (a crime that Agatha Christie based on the famous kidnapping of Charles Lindbergh’s baby) are the key to the entire mystery.

Hercule Poirot (Albert Finney) discovers that 12 of the passengers on the train had close ties to the Armstrong family, whose daughter Daisy was kidnapped and murdered by Ratchett (Richard Widmark). For a time, he can’t figure out which one of them killed Ratchett.

In the end, he calls all the suspects together, along with the railroad director (Martin Balsam), and offers two possible solutions to the mystery. The first solution (the correct one) is that all 12 suspects killed Ratchett together. Ratchett was drugged in his berth, and while he slept, each of the conspirators took a knife and stabbed him, one at a time, to avenge the murder of Daisy Armstrong. There are 12 people on a jury, so this seemed an appropriate way to carry out justice.

Poirot sympathizes with the suspects, so he offers a second solution, one he knows is false: that a member of the Mafia, dressed as a conductor, sneaked onto the train, murdered Ratchett, and escaped through the snowy wilderness.

The railroad director realizes that Ratchett was evil and deserved what he got, so he endorses the second theory.  When the train reaches its destination, he will lie to the police and tell them that Ratchett was killed by a Mafioso.

The snow is finally cleared from the tracks, and as the Orient Express begins to move again, the conspirators drink a champagne toast to their ringleader, Mrs. Hubbard (Lauren Bacall), and congratulate each other on a job well done. 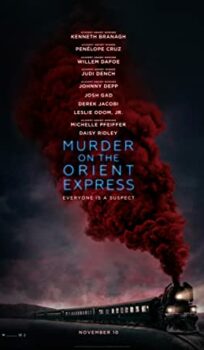