Murphy (Peter O’Toole) is a sailor in the merchant marine during WWII.

His ship is sunk off the coast of Venezuela by a nazi U-boat. The U-boat machine guns the survivors in the water, and only Murphy lives.

It is clear the war is ending soon, and the U-boat captain heads up the river to hide out and avoid being killed before the war is over. Murphy knows they will have to come back down the river, and is determined to get revenge for his shipmates.

Murphy learns to fly a float plane, and tries bombing them with homemade bombs, but fails to damage it.

The war ends, and the U-boat heads down the river. Murphy is told that he can no longer go after the U-boat as the war is over. He replies, “Not my war”. As the U-boat exits the river, Murphy is at the controls of giant floating crane. He attacks the U-boat with the crane. They fire torpedos at him, and dive to avoid him. The U-boat gets stuck in the sand. With the crane, Murphy picks up a torpedo, and drops it on the U-boat, destroying the U-boat. Murphy also dies in the explosion. 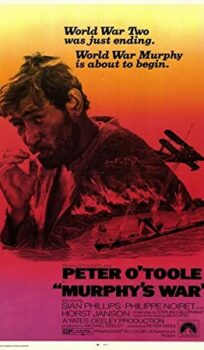