Pooper:
Mitch is the only one who survives the mission. He manages to launch the machine into space, thus saving the world.

Long Ending:
Based (apparently)  on a role-playing game, the movie opens thousands of years ago. A machine plummets from space to Earth and begins harvesting humans and turning them into mutants. Humanity bans together and manages to bury the machine in a lost city where it can do no harm. A religious order forms soon after to keep watch over the machine.

Jumping to the far future, the Earth is largely barren and controlled by four warring corporations. In the midst of a battle, we meet Major Mitch Hunter (Thomas Jane), Captain Nathan Rooker (Sean Pertwee) and Corporal Jesus de Barrera (Luis Echegaray). While repelling an attack, the battling forces unearth the machine and unleash a number of mutants. The mutants are fast, feel no pain, and the mutants have a razor-sharp scythe-like appendage where their arm should be. The mutants immediately attack both forces and slaughter most of the soldiers. Nathan is dragged away by the mutants and Mitch and Jesus are the only ones rescued from the battlefield.

The religious order discovers that the machine is awakened. The Order, led by Constantine (a paycheck-cashing John Malkovich), orders an evacuation of the human populace to Mars. Two of the Order’s followers, Brother Samuel (Ron Perlman) and Severian convince him to form a small force of soldiers to attack the machine directly. The Order has a device that the original humans removed from the machine that they believe, if reinserted and activated, will blow the machine up. They attract a force of soldiers from all corporations, mainly by offering them free tickets to loved ones to travel to Mars (the price to go to Mars is otherwise exorbitant). Having promised to take care of Nathan’s children, Mitch agrees to participate in the suicide mission in exchange for the children to be taken to Mars. He is joined by Jesus, Severian, Samuel, and soldiers from different corporations including John, Valerie (Devon Aoki), Maximillian, and Juba. Samuel and Mitch often butt heads as Samuel is a religious believer and Mitch is not.

En route, the mutants attack Samuel’s aircraft and John is fatally wounded in the crash. The rest make their way to the City where, much to the group’s dismay, Mitch jeopardizes the mission by confronting soldiers keeping various people from boarding a shuttle to Mars. Even Samuel thinks that lives are worth sacrificing for the mission. The group enters the lost city and descend through an elevator shaft to the underground part of the city. Juba sacrifices himself to stop the mutants from descending upon the group. Mitch leaves the group when he sees that Nathan is still alive and about to be transformed into a mutant. He rescues Nathan, but Nathan is too severely wounded to live much longer. Nathan encourages Mitch to finish his mission prior to being mercy-killed by Mitch.

Eventually, Mitch reunites with Severian. He learns that during a fight with the mutants, Jesus’ gun backfired, killing him and wounding Maximillian. The mutants overwhelmed and captured Maximillian, Valerie and Samuel. Although neither of them know how to activate the bomb, the pair continue on. Ultimately, they manage to rescue Valerie and Maximillian (who shortly thereafter sacrifices himself to save the group). Mitch accidentally stumbles upon and is captured by the contraption that turns humans into mutants, but is able to free himself before the transformation is completed.

The remaining three reach the machine itself and try to arm the bomb as a horde of mutants descend upon them. Valerie is killed when she falls off a platform and is sliced in half by a rotating blade, and Severian is killed by the mutated Samuel after she refuses to kill him. Mitch and the mutated Samuel fight with Mitch getting the upper-hand. He then figures out how to arm the “bomb,” but soon realizes that the device they thought was a bomb was actually an ignition switch and that the machine is being launched into space. Samuel whispers to Mitch to have faith and Mitch closes his eyes and leaps from the platform. He avoids the debris and lands safely in a lake as the machine blasts off from Earth, no longer a threat to humanity. 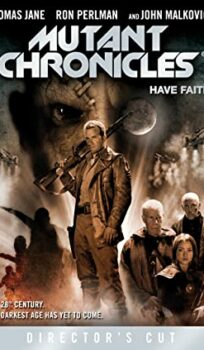