Over time, Vinnie’s (Steve Martin) fun-loving and jovial attitude, fashionable wardrobe, and superb dancing skills rub off on Barney (Rick Moranis), and Vinnie starts to engineer a potential romance between Barney and Hannah (Joan Cusack), the Assistant D.A. of Fryburg, feeling that they would be very compatible, and he starts by treating them – as well as Hannah’s sons Tommy (Corey Carrier) and Jamie (Jesse Bradford) – to a San Diego Padres game and having them sit next to each other. The matchup is a successful one; while out on another date, Barney and Hannah have a wonderful time together and find that they have much in common, and they end up sleeping together at her house. The next morning, Barney scores extra points with Hannah by physically ejecting her intrusive ex-husband Will (Daniel Stern) from the house when he makes another unannounced visit. Also, Vinnie learns from Tommy and Jamie after the Padres game that their little league baseball field is of substandard quality, and he suggests that they find a way to raise money to construct a better field.

Some days later, Barney goes into the office and finds out that his supervisor Underwood (Ed Lauter) has selected him and his co-worker Kirby (Bill Irwin) to go undercover and bust a major hijacking ring, and the sting operation will be starting tomorrow and could take weeks to complete, so that means that he will no longer be supervising Vinnie. Knowing that this will also put the chill on things between him and Hannah, Barney lets her know about his new assignment and how he won’t be able to contact her for the duration of it, which disappoints her. However, what Barney and Kirby don’t know is that the hijacking ring being investigated is the one Vinnie is running with some fellow mobsters that were also put in the witness protection program and relocated to Fryburg, and Vinnie doesn’t know that the “big spenders” that are seeking to buy goods from his ring are Barney and Kirby.

One day, Vinnie’s men steal a truck thinking that it is full of stereos, but they discover that it is actually full of empty water cooler jugs. After checking them out, Vinnie decides to use them to collect money from people for the purpose of financing the construction of the little league field. Vinnie puts the jugs at various businesses around town, and the money starts being donated fast. A few weeks later, Tommy and Jamie spot Vinnie collecting a couple of full jugs and then notice another jug in an ice cream shop with an advertisement on what the money is going to be used for, and they tell Hannah all about it. Thinking that Vinnie is swindling people, she has him arrested. While being photographed and fingerprinted, Vinnie tells Hannah that he had every intention of putting the money towards a new baseball field, and then – in a subtle attempt to strike a deal with her – he informs her that there is major crime going on in this town that she is unaware of and he can tell her quite a bit about it. After Crystal (Melanie Mayron) (a policewoman who has shown an attraction to Vinnie and believes that he is being honest about his fundraising endeavors) implores Hannah to at least listen to Vinnie because he might be telling the truth, Hannah decides to give Vinnie a chance to explain. He proceeds to tell her that two of the biggest fencers in North America are sitting right here in Fryburg, and they are looking to buy a ton of swag and ship it out of here in boxcars. She decides to look into this, and in the next scene, we see her, Vinnie, and two cops pulling up outside of a motel room, since Vinnie told her that the fencers are holed up here. However, when the cops kick the door in, they discover Barney and Kirby inside. Though Vinnie tells Hannah that he didn’t know anything about this, Hannah angrily informs him that their deal is off and that she is arresting him for running a moneymaking scam and will be indicting him under his real name. Barney later talks to Hannah and warns her that, once the news of this arrest gets out, mafia hitmen are going to come to Fryburg to try to take out Vinnie. Unfortunately, she doesn’t believe him, and she also starts to give him the cold shoulder because he was the one who brought Vinnie here.

Barney later visits Vinnie in his jail cell and finds him writing out his memoirs (and also finds that he has used his charms to gain preferential treatment there, plus Crystal has given him a pillow with his name embroidered on it), and he chews out Vinnie over this latest apparent blunder of his as well as his past ones. Barney also blames him for screwing things up between him and Hannah, because even though he loves her, she now hates him due to the fact that he brought Vinnie to this community and Vinnie has become a blight on it. Vinnie apologizes and thanks him again for saving his life from hitmen back during an earlier visit they made to New York for his first trial appearance, and he reveals that he could never shoot anyone and he has never touched a gun in his life, which is what doomed him to middle management in the mob. He then says that he should do something and asks Barney what can he do, but Barney tells him to just stop doing things. Vinnie then says that he has to make a phone call.

During Vinnie’s bail hearing, two mafia hitmen appear on a balcony, but Crystal notices them reaching for their guns and alerts everyone to their presence, and Vinnie avoids getting shot. The hitmen soon retreat after Barney, Underwood, and some cops return fire, and Crystal helps Vinnie escape the courthouse and get out to her truck. She gives him the keys to it as well as her gun, and after he thanks her for saving his life, they kiss, and she soon agrees to join him in his escape. They drive for a bit until they reach a construction site, where it turns out that Vinnie and his crew ARE having a new baseball field made using the money they collected. Barney, Hannah, and the police then appear, and after checking out her surroundings, Hannah asks Vinnie why he never mentioned this new field to her when she arrested him earlier, and he replies that this was supposed to be a surprise. She then accuses him of not saying anything about this because he had arranged all of this from his jail cell in order to avoid prosecution for embezzlement (which is very likely true, given the phone call that he made the day before, but he more than likely did this to both appease Barney and improve his own reputation), but he replies that this was his intention from the very beginning. He then proceeds to give Hannah an emotional anecdote, but before he can finish it, the hitmen turn up with their guns pointed at him and tell him to come over to them in exchange for nobody getting hurt. Vinnie initially feigns surrender before he quickly ducks behind some pallets, takes out Crystal’s gun, and shoots their guns out of their hands. The cops rush up to the hitmen and cuff them, and Vinnie admits to Barney that he lied about never shooting a gun. He then finishes his anecdote to Hannah before capping it off by telling her that, while she can accuse him of many things, he never planned to rip off the children. He asks Barney to back him up, and Barney does just that, explaining to Hannah that he knew about this ballpark for months, but kept it under his hat because it was indeed supposed to be a surprise. Hannah accepts this as the truth, and she and Barney kiss.

A year later, the new Vincent Antonelli Stadium opens and makes ready to start its first little league game. Vinnie’s mafioso buddies are working various concessions, and it is shown that Vinnie wrote a national best-selling book about his life in the mafia and was declared Fryburg City Council’s Man of the Year. Vinnie’s ex-wives Linda (Deborah Rush) and Shaldeen (Carol Kane) are shown in the stands with new husbands that are also federal witnesses, and Hannah announces to everyone that Vinnie will be throwing out the first pitch. After doing so, Vinnie joins Crystal – who is now his wife – and their baby daughter up in the stands. Barney is also shown to have become the coach of the Fryburg Turtles team that Tommy and Jamie play for. 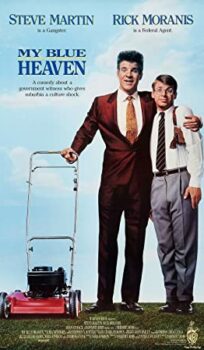