This film features very early performances from actors like Matt Dillon, Joan Cusack and Adam Baldwin, who would later go on and become well-known, established performers in American cinema and television.

Short pooper:
Ricky (Adam Baldwin) opens up to Clifford (Chris Makepeace) and confesses that he was the one who accidentally shot and killed his younger brother, but, in fear of repercussion, made believe the brother did it to himself, having had to live with the guilt and remorse ever since; this explained his reclusiveness towards everyone around him. Later, when Moody (Matt Dillon) returns with Mike (Hank Salas) to pester Clifford and Ricky, they both decide to stand up and fight back, defeating the two bullies and solidifying their own friendship in the process.

Longer version:
Ricky secretly turns up at Clifford’s balcony, asking for some money, after being AWOL for the majority of the day, following the park incident with Moody and his gang. When Clifford can only produce $6 dollars, he nonetheless takes it and leaves. Clifford follows Ricky all the way to a train station and confronts him about his mutism related to “finding his younger brother dead” (the official version of his painful secret, still going around). At this point, Ricky angrily but tearfully confesses that he, himself, shot and killed his brother by accident, when they scuffled over their having a go at holding their father’s gun and, then, later, covered it up to avoid getting in trouble by making it look like the brother shot himself. Clifford wants to reassure him about it not being his fault, but Ricky just won’t hear it and takes off in a passing train.

A few days later, Clifford, Carson (Paul Quandt) and Shelley (Joan Cusack), hanging out together, return to the same park where the bike incident happened and they see Ricky. Clifford catches up with him and, at the same time, so does Moody with his cronies. Moody provokes Ricky by demanding his bike and, then, summons Mike, who taunts Ricky to give up the bike. A fight starts between them, with Ricky eventually gaining the upper hand and putting the older-looking thug in his place. When Moody tries to intervene, Clifford, having had enough of Moody’s antics, forces him aside into a quarrel of their own. At first, Clifford is getting nowhere, but, with some coaching from Ricky, he is finally able to land some good punches on Moody and defeat him.

Moody falls to the ground with a broken nose and whining non-stop, thus revealing that he was nothing but an abusive, advantage-taking coward. Both he and Mike get up and walk towards their gang, who are now all dismayed and looking down on them, while Clifford and Ricky commend each other for their victory and are cheered at by Carson and Shelley.

The movie ends as Ricky, now in very good terms with Clifford and his friends, as they all walk away, jokingly asks Clifford to “be his bodyguard, in exchange for payment and doing his homework for him” -just like Clifford did, earlier in the film, when looking for protection from the bullies-, to which Clifford claims “not to be interested and to want a higher price”, while laughing. 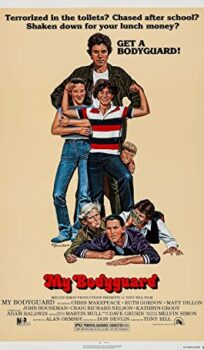