SETI eventually captures Martin (Christopher Lloyd) and Tim (Jeff Daniels) and takes them to their headquarters, along with Martin’s shrunken ship that has Lizzie (Daryl Hannah) and Zoot trapped inside. Dr. Coleye (Wallace Shawn) has Tim thrown in a cell and Martin sent to the operating room. Tim eventually tricks one of the scientists into regrowing the ship back to its normal size, which allows Lizzie and Zoot to escape. Lizzie frees Tim from his cell, and though Zoot tries his best to defend them from the security guards, they outmatch him. However, Zoot has Lizzie chew on a Veenox 7 nerplex, which turns her into a Veenox 7 monster and enables her to defeat the guards. The three then go to the operating room, where Martin has just been pronounced dead. Tim and Lizzie knock out Coleye and put Zoot on Martin, which brings him back to life.

The group then escapes SETI and get to an open area, and after the alternator from Tim’s car is installed in Martin’s ship to make it work again, Martin bids Tim and Lizzie farewell. Coleye then shows up with a gun, but Armitan (Ray Walston) appears and tells Coleye to let Martin go. Coleye refuses, so Armitan telekinetically disarms him, and Martin realizes that Armitan is his long lost friend Neenert in a human disguise. The two martians daze Coleye with their powers, and after Neenert discards his nerplex, they board the ship, say their goodbyes, and take off for Mars. Coleye finds the nerplex and puts it in his mouth, and he turns into an alien like Martin. He initially laughs at the transformation, but then he accidentally swallows the nerplex, making this alien form permanent. He is then captured by his own organization while Tim and Lizzie get away.

Some time later, Martin and Zoot return to Tim’s house with supplies and tell Tim and Lizzie that they’re going to stay with them, and Neenert pilots his ship back to Mars. Tim is initially none too thrilled about this, but a passionate expression from Lizzie makes him change his mind, and they kiss. The movie ends with Zoot going into the washing machine with a copy of Victoria’s Secret (He’s smitten with the lingerie, not the models). 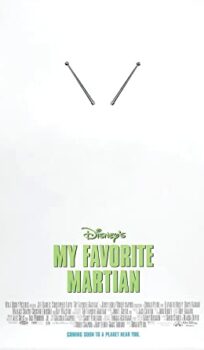