When he goes back to the woods, to recover Vada’s (Anna Chlumsky’s) mood ring, Thomas J. (Macaulay Culkin) is accidentally attacked by bees from the beehive they had both knocked down earlier, and dies from the stings.

The funeral takes place at Harry’s (Dan Aykroyd’s) parlor.  Vada, considerably upset for this incident -as well as for finding out afterwards that her crush, Mr. Bixler (Griffin Dunne), is marrying his girlfriend-, runs off, but returns at night.

Eventually, things stabilize in Vada’s life.  She and her dad, Harry, finally reach to each other, she “gets to swallow the chicken bone” (which means she no longer fears death), and in the end she is seen riding bike along with a new pal, Judy(Cassi Abel) -who would go on to become her best friend in “My Girl 2”-. 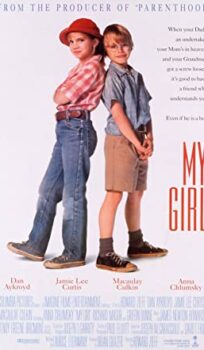