Godfrey the butler (William Powell) turns out to be a wealthy man who had fallen upon hard times during the Great Depression. When the spoiled, silly Bullock family faces financial ruin, Godfrey saves the day by bailing out their debts. He had made some profitable investments by pawning one of the necklaces of the Bullock daughters and using that money to buy stocks.

After he saves the Bullocks from their financial troubles he quits as the butler. However, Irene (Carole Lombard), one of the Bullock daughters, has fallen in love with Godfrey, and has tried all sorts of schemes to get Godfrey to admit that he loves her too. Godfrey gently lets her down but Irene is determined and tracks him down at his new office.

The movie ends with Godfrey being strongarmed by Irene into marriage. It’s implied that even if he’s not in love with Irene, he does feel some affection for her, so the marriage won’t be a total disaster. 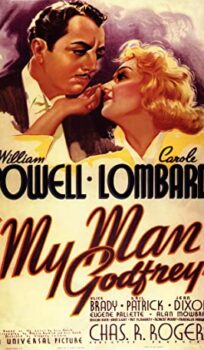