Sara’s (Cameron Diaz) daughter, Kate, has a rare and deadly form of leukemia and was diagnosed at an early age. To help save her life, Sara and her husband had another child, Anna, who was genetically screened to be Kate’s exact match for future blood, bone marrow and organ donation.

Anna (Abigail Breslin), tired of being put through painful tests, decides to sue her parents for medical emancipation so that she doesn’t have to donate one of her kidneys to her dying sister. Anna is represented by Campbell (Alec Baldwin) and Sara, a former lawyer, represents herself in the trial. At the hearing, Sara cross examines Anna, telling her she doesn’t believe Anna’s reasoning for suing and refusing to help Kate. Things get heated in the courtroom and Anna’s brother, Jesse, blurts out that Anna should tell the truth. All is revealed when Anna confesses that Kate asked her to sue for medical emancipation so that Kate herself doesn’t have to have the surgery and can instead die peacefully. Sara is shocked at this revelation since she has fought so hard to keep Kate alive for so many years.

After the trial, Kate and Sara spend a final night together in the hospital and Kate slips away peacefully. The movie concludes with Anna telling the audience that every year, on the anniversary of Kate’s death, the family gathers in Wyoming where Kate went at one time and was happiest.

(Note – READ THE BOOK! The movie changed so much, including the original shocking ending.) 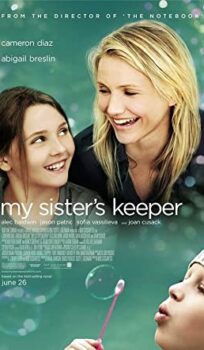